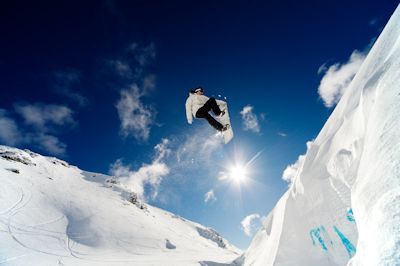 It was a very inviting terrain for snowboarding in the Polecat Bench range of Wyoming. Matt and Michael Walsh were there on February 8, 2014, along with their parents. Their dad is the pastor of Glad Tidings Assembly in Powell. They were at an elevated flat area that had small cliffs and steep gullies, an ideal contour for snowboarding.

The two teenage boys prepared for their adventure, but it would turn out to be more than they anticipated. Matt went first, then Michael. Cracks developed in the snow, then they heard popping sounds. In an instant, Matt was buried under three feet of snow as an avalanche unfolded before his brother’s eyes. With no transponder or search pole Michael had no idea where Matt was. He quickly debated whether to call 911 search and rescue or to go look for his brother. He discerned that God was telling him to do the latter and took off running, but suddenly stopped, yelling out for Matt. Then he took one more step-one that was a miracle, and heard his brother’s voice.

He looked down and directly below him saw a hole the size of a baseball. Matt had been digging from underneath at the same place Michael’s step broke through the hole. Thirty minutes later Matt was rescued safe and sound. But this is not the end of this miracle story.

When his mom was pregnant with Matt she started to miscarry. Some young people were brought over from the church and prayed over Matt and his mom. One of the kids prayed, “You’re not going to lose that baby, because God’s going to do great things with him.” The bleeding stopped and Matt was born normal. He had known about this prophecy over his life for years. At that moment of uncertainty under the snow he claimed the prophecy and had God’s peace come over him.

Psalm 37:23 applies here. “The steps of a good man are ordered by the Lord…” Proverbs 16:9 says, “The mind of man plans his way, but the Lord directs his steps.” This verse came to life, literally, for Matt Walsh. The prophecy will, no doubt, come true for Michael also.

John Livingston Clark is 67 years of age and lives in central Washington State. He has written two published books, and two published poems. His initial book is called, " God's Healing Hope: Breaking the Strongholds of Wrong Thinking." His second book, released in December of 2016, is a motivational book written to seniors titled, " Seniors: Are You Retiring or Recharging?" Both books are available on amazon. You can also view his writings on www.faithwriters.com. John is available to speak on a variety of topics. Visit me at jclarkministries.com
Previous Overcoming Heavy Temptations
Next A Marine Fighter Pilot’s Faith