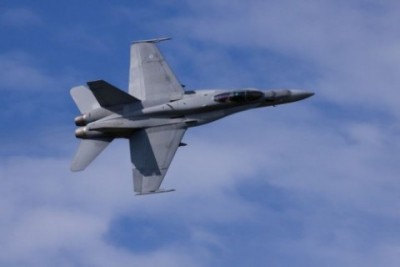 Whether in the air flying the FA-18 Hornet as a Weapons and Tactics Instructor, on the ground as a fearless father of five, or on his computer frequently blogging his faith as a follower of Jesus Christ, waging weapons of words is Jason B. Ladd’s mission.

Following in his father’s military footsteps, Jason attended college at UNC Chapel Hill where he enrolled in the ROTC program and then joined the U.S. Marine Corps.  Prior to going off to college, he met his future wife while in high school where they both attended the same school over seas.  While attending college, Ladd continued a long distance relationship with his future wife and they married shortly after he graduated from college.

“A lack of interest, enthusiasm, or concern”

One evening in 2005, Ladd and his new bride were carrying on a conversation when the topic turned into a more serious subject matter: death.  His wife, who was a Christian, took the opportunity and asked -“What do you think happens when we die?”  Jason’s response-“I don’t know…blackness?…”You really believe that?”  His wife’s reaction to his worldview blew life into embers that Jason did not realize were already glowing, waiting to be stirred.

An uneasy feeling came upon Ladd as he recognized that he was not prepared to be a father the way a father should be. He wanted to be the kind of father who could offer truthful answers to his kids when they asked the hard questions that his secular view would not provide.  They began to attend church, and his appetite grew giving him a hunger for the Word and a desire to delve into books on God and theology.  Slowly, his worldview began to peel away.  God was pursuing a softening heart, and Jason was heeding to his call with no turning back.  In spite of the secular saturation and new atheism in the world, Jason chose to let go of his spiritual apathy to follow Christ.

“The imparting or exchanging of information or news:”

Writing was not a subject area Ladd ever saw himself venturing towards, but reading had become his passion and naturally reading at some point pairs with writing.   As time passed, Ladd’s library of knowledge needed an outlet to overflow into, so he began working on a writing project he describes as a Marine fighter pilot’s struggle with doubt during his search for truth and defense of the Christian faith. What was meant to be written down for family and friends, has blossomed into a memoir he continues to work on today.

With a little extra time on his hands, Ladd expanded the lines of communication and entered the world of Social Media, a challenge all in itself.   Merging his favorite topics (God/Theology/Apologetics) along with technology (Blogging) Ladd began to write about the “importance of establishing a coherent worldview and how it affects every aspect of your life.”

Unique in his writing style, Ladd draws in the reader making them feel as if they are flying along with him for the mission that is to be accomplished “to help you lead with conviction, embrace parenthood with joy (failures and all), and develop a worldview capable of answering life’s biggest questions”

“Words mean things”- whether the topic is on parenting, being a Godly spouse, obedience, or any other subject matter, from take off to landing, he maintains your attention through his word choices.  His metaphorical ways of making connections from military aspects to scripture are applicable and true to life.

“I will often use my background in Peace, War, and Defense as a framework for discussing current events and other relevant issues.”

Taking time out to shove away your own selfish needs is not easy, but the notion is high on Ladd’s priority list.  He encourages people to just play with your kids. The time invested in their lives can never be replaced.  It is one priceless gift that pays itself back.

Although his life is full of everyday busyness, Ladd does his best to maintain a balance between being a fulltime father, husband, instructor, and now blogger.  He states that at times things get out of check, but his wife is not afraid to remind him when the scales are tipped a little too far one way or the other in order to help keep him from falling.

Jason B. Ladd went on a mission seeking answers to prepare himself as a father and along the journey he gained something worth fighting for.  The question is, “What are you fighting for?”

For more information about Jason B. Ladd, or to read his articles, visit his website at

is an author and editor for The Bottom Line Ministries as well as a member of Faith Writers. Currently she teaches high school language arts. She is a mom to four amazing blessings and enjoys every moment life has to offer. Renee has a fervor and drive to learn, she loves to read and spend time with her family, and is involved with her local church ministries. Humbled by God’s gift of words, she has a passion to write what the Holy Spirit has placed in her heart. She hopes to publish her in-progress book someday, but in the meantime, is honored to be placed as part of the TBL writing family and is holding on to the ride wherever God is leading. Renee and her family reside in their country home in Holland, Iowa.
Previous Snowboarding and God’s Miracle Rescue
Next In God We Trust