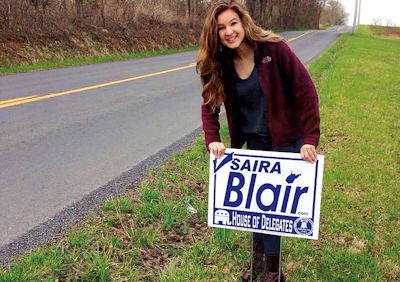 Understandably, the majority of the news coverage on Tuesday, November 4, 2014, was focused on the Republican sweep in Washington D.C. We have seen a huge shift of power in our nation’s capitol. Hopefully, our elected representatives will get down to the business of leading the country. While all of this was unfolding in Washington, a story of a different kind was making headlines in West Virginia.

An 18-year-old college freshman at West Virginia University was seeking to represent a small district in her state. Saira Blair said she decided to run for political office because “my generation’s voice, fresh perspective, and innovative ideas can help solve some of  our state’s most challenging issues.” Ms. Blair, who is pro-Second Amendment, pro-life, and opposed to same-sex marriage, defeated her 44-year-0ld opponent by a whopping margin of 63 percent to 30 percent. By doing so, she became the youngest elected lawmaker in United States history.

Saira Blair has shown the nation that youth and inexperience is not a deterrent to winning in politics. I wish more young adults would aspire to holding a political office. A neighboring community where I live recently had one of the youngest mayors in the country. The youth of our nation have a voice that needs to be heard. They have beliefs and ideas that are not bound by the traditional way of doing things and political rhetoric. Maybe winning an election by a huge margin will be an incentive for more people her age to run for office.

Washington D.C. saw a huge dramatic change in partisan politics, but West Virginia witnessed a teenager who had enough conviction for her beliefs, and courage, to run for and win, an elected position to represent the people of her district. Saira Blair is an inspiration and a breath of fresh air to politics as usual. Kudos to her!

John Livingston Clark is 67 years of age and lives in central Washington State. He has written two published books, and two published poems. His initial book is called, " God's Healing Hope: Breaking the Strongholds of Wrong Thinking." His second book, released in December of 2016, is a motivational book written to seniors titled, " Seniors: Are You Retiring or Recharging?" Both books are available on amazon. You can also view his writings on www.faithwriters.com. John is available to speak on a variety of topics. Visit me at jclarkministries.com
Previous When Our Emotions Run High
Next Veteran’s Day: Service From A Mom’s Perspective