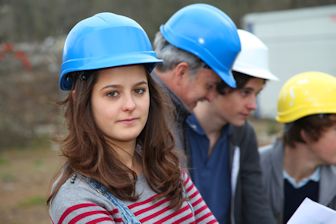 In Lansdale, Pennsylvania, outside Philadelphia, the Church consists of teens “who have criminal records, hate the church scene, or are judged as troublemakers by pastors.” That is the description of a ministry called “252 Underground,” which is based on Luke 2:52, “And Jesus kept increasing in wisdom, and stature, and in favor with God and men.” Instead of being given religion, they are truly being modeled after Jesus.

Pastor Rob Cook targets young people from 12-30 who don’t go to church or “aren’t allowed inside one because they smoke cigarettes or hold on to other vices.” He goes to those who hang out on streets but “who are angry, hurting, and lost.” Since its founding in 2004, the ministry has reached 1,100 teenagers and young adults with the gospel message of healing and hope in Jesus at a time in our culture when many people of this age have turned their backs on church and religion. Rob says “I wanted to create a ministry where they would be accepted. I wanted to show them who Jesus really was-and is. I wanted to show them God wanted a relationship, not a religion.”

Besides some very dramatic conversions to Christ, Pastor Cook has also encouraged and seen a heart for service. He says a big emphasis is on doing what Jesus would do. After these young people make decisions for Christ they help those in need. In one instance 20 of them helped find and furnish a home for a family whose house burned to the ground. They devoted their high school senior project to assisting this homeless family, including securing new appliances and a laptop.

The success of this ministry has been described by a close friend of the pastor. “A strong, deeply personal drive to work with troubled teenagers led Rob to begin a creative and unique night club-style haven for young people in downtown Lansdale.” Through his efforts of practicing “friendship evangelism” dozens have been converted to Christ and discipled into a better, more productive way of life.” These tough teens who at one time might have been hanging out on the streets have hearts that have been transformed, not by religion, but by a relationship with Jesus. Now they are going out to the streets with a new mission in life-helping the hungry, poor, and needy.

John Livingston Clark is 67 years of age and lives in central Washington State. He has written two published books, and two published poems. His initial book is called, " God's Healing Hope: Breaking the Strongholds of Wrong Thinking." His second book, released in December of 2016, is a motivational book written to seniors titled, " Seniors: Are You Retiring or Recharging?" Both books are available on amazon. You can also view his writings on www.faithwriters.com. John is available to speak on a variety of topics. Visit me at jclarkministries.com
Previous Sing A Song! Part III (Praise Exalts)
Next Shysters: When Not To Give