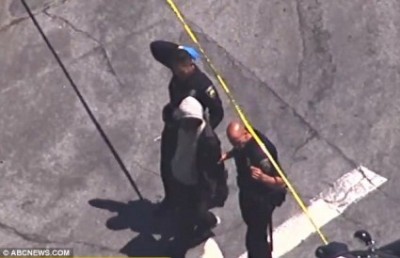 On Friday, June 5, at the Milpitas Public Library in Northern California, a three-year-old was kidnapped from his mother while they visited the library.  Bus driver, Tim Watson, saw the alert and logged the boy’s description: blue shirt, plaid shorts, red crocs.

Later, during his route, Tim noticed a young, teary-eyed child who looked to be around three years old with a young man at the back of the bus.  Tim, remembering the child kidnapping alert he had seen earlier, recognized the suspect.  At that point,  Tim concocted a sly plan to check out things more closely.  Announcing the need to look for a green backpack reportedly left on the bus, Tim pulled the bus to the curb.  While looking in each seat, he made his way to the back of the bus where the man sat holding the child.  After getting close enough to see the little boy’s red crocs in the suspect’s bag, he was sure it was the child which prompted the alert.  Tim knew he had to stay calm.  He knew he couldn’t cause any concern to the alleged kidnapper.

After having nothing to show for the non-existent backpack search, Tim returned to the driver’s seat to supposedly call in to report his results.  But, instead of calling about a backpack, he called to arrange a rendezvous with police at a scheduled bus stop.  The suspected kidnapper didn’t have a clue about the plan.  Foiled!  The police were at the stop and booked the 23-year-old man for kidnapping.  They found he had no known connection to the child.  Only God knows what nightmare could have followed.

Tim is being hailed as a hero.  He attributed his quick actions to being a father himself.  He said that he simply “followed his paternal instincts”.  I’m sure there is a very happy mama who is extremely thankful for this man’s commitment to creative problem solving!

God cares about those things that concern us.  (Psalms 138:8)   When we receive a rescue or reprieve,  sadly, our first thought, often times, is to chalk up our rescue to coincidence or luck.  But, for those of us who call God our Father, our first thought should attribute our rescue to His loving kindness and angel guardianship.  Sometimes God uses our fellow humans to do something significant and then that one enjoys the limelight.  But our God is the one who makes it possible every time.  Yes, every time.  We must praise the Lord and thank the one He used.

In what situation have you been rescued or seen someone else rescued and first thought it coincidence or luck?  Can you now think back and see God’s loving hand reaching in on your or their behalf?  He would still enjoy hearing you recognize His loving rescue.

I just love walking outdoors - day or night. I identify most with the creative side of God and am energized by His artistry all around this world. He amazes me every time I turn around! Yeah, God and thank you, Jesus.
Previous It’s Not a Sin to be Tempted!
Next How to Deal With Toxic Family