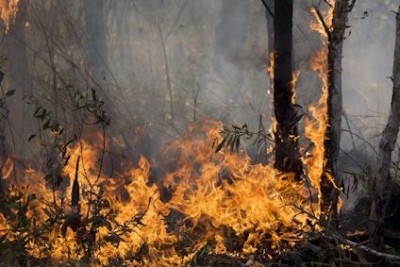 The Miracles of Hume Lake: A Raging Forest Fire Spares a Christian Camp

In the mountains east of Fresno, California, a fire started by a lightning strike has been raging for weeks. Thousands of fire personnel have been engaged in fighting this inferno, named the “Rough Fire,” the 18th largest in state history. In the middle of it all lies Hume Lake, home of a Christian camp and conference center. Firefighters from the camp, the organization Firefighters for Christ, and several counties, have been working to contain the fire and spare the camp.

Hume Lake was threatened by the approaching flames several weeks ago and had to be evacuated. It then turned into a command center. Because of its large kitchen and dining facilities, and sleeping accomodations designed for hundreds of campers, it was an ideal spot for taking care of the basic needs of the firefighters. Many families and spouses were delighted to know that it was providing a haven for rest and relaxation. Even a truck from Sisco Corporation delivered food to the camp, made possible by a driver willing to brave road closures, smoke, and potential fire hazards.

The camp has been spared by the containment lines made around it and God’s supernatural intervention, even though the fire has been burning on all sides of it, an oasis in the midst of ashes!

Due to the Christian nature of the camp, chapel services have been conducted for any who voluntarily wish to attend. During a recent service a camp staff member presented the gospel plan of salvation. One fireman responded positively to it, and entered into a personal relationship with Jesus Christ.

It is amazing how God works. He spared Hume Lake Christian Camps from fire burning around it. Because of that a command center providing food, sleep, and relaxation was made possible. Firefighters were exposed to God’s love and caring Christians. Then one man committed his life to Christ. His life will never be the same because he was there fighting a fire.

There is a spiritual application to this heartwarming story. I Peter 1:6-7 says, ‘”In this you greatly rejoice, even though now for a little while, if necessary, you have been distressed by various trials, that the proof of your faith, being more precious than gold which is perishable, even though tested by fire, may result to be found in praise and glory and honor at the revelation of Jesus Christ”(emphasis mine). This is how we grow as Christians. As this one fireman began a journey with the Lord Jesus Christ, so you, too, can see God at work in your life. How many “spiritual fires” are you fighting? What kind of trials and tests are you experiencing right now? Commit them to the Lord and allow Him to work in your life through them.

John Livingston Clark is 67 years of age and lives in central Washington State. He has written two published books, and two published poems. His initial book is called, " God's Healing Hope: Breaking the Strongholds of Wrong Thinking." His second book, released in December of 2016, is a motivational book written to seniors titled, " Seniors: Are You Retiring or Recharging?" Both books are available on amazon. You can also view his writings on www.faithwriters.com. John is available to speak on a variety of topics. Visit me at jclarkministries.com
Previous Do you want to be a Billionaire?
Next What to Do If You Are Battle Weary?