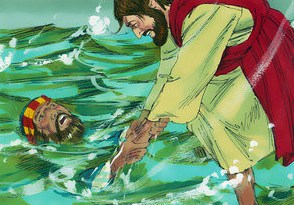 Our Hope: Get Out Of The Boat

At some point in our lives, we cry out for fear.  Fear comes in many forms, for many reasons, and it comes for everyone.  Even the most courageous people, the strongest ones, face fear.  Many times there is no basis for the fear, such as my incredibly ridiculous fear of heights.  But quite often fear comes from past experiences, or from seeing other people suffer from situations that may parallel one’s own life, such as a fire fighter who has heard of or seen a tragedy befall another in the same profession.

Weak or strong, with no basis or with a solid foundation, fear has the ability to rob us of the joy Jesus has promised His followers.  It can literally stall our progress in our businesses, our marriages, our parenting skills.  It can even encroach upon our ability to serve God effectively.

Imagine the disciples, sitting in a boat on the Sea of Galilee.  A wind blows up, making the waters rough and choppy.  Now, imagine looking out over that sea, at its troubled waters, and seeing what appears to be a man walking on it.  What would be your first reaction?  That’s right, the flesh part of us would immediately be drawn to the vision of a ghost, or a phantom, or perhaps even a demon.  Scripture tells us for them it was a ghost.

But these men knew Jesus!  And they knew Him well.  They had seen His power, most recently, just prior to departing in the boat, they had seen the miracle of the Feeding of the Five Thousand. They had seen people healed from disease.  They had even witnessed restoration to life after death.

But for that moment, those few seconds, they saw a ghost.  They experienced great fear.  But even in that moment, Jesus knew of their fear.  So He presented one more miracle that night.  He reassured them that it was He, and they realized it was–and He was walking on the water!

But the story is not done.  Jesus took this opportunity to teach His disciples. Peter wanted to show Jesus just how much he trusted Him.  He asked Jesus to command him to walk to Him.  But in the same breath, Peter also challenged Jesus to prove He is who He says He is.

Peter wasn’t still uncertain, was he?  He wanted to believe this was Jesus, but we must remember who Peter was.  He was the disciple who was spontaneous in all his reactions.  He had to see to believe, not like the disciple Thomas, not to that degree.  But still, if he could look at Jesus walking toward him, and still not truly recognize Him, that shows us that there were still some issues in Peter’s belief and trust.  So we will see, as Jesus complied with Peter’s request.

To accomplish what Jesus commanded Peter to do, he was required to get out of the boat.  He could not walk on the water without taking that first, rather terrifying step.  Remember, a rough sea awaited him.  But we can assume that not only did Peter want to know this was his Lord, we can also believe that he wants to be the first, and the most courageous, of the disciples in the boat.  At the same time, he was like we would probably be as well … afraid.

While he did indeed challenge Jesus to prove Himself, he also tried to show Him that he did trust Him.  It was a bit of a turn-around situation here, but don’t we all feel like Peter sometimes?  We trust Jesus, yet we still don’t believe He will do certain things for us.  We are today’s Peter.

So Peter walked on the water.  He walked towards Jesus, and he could see Him, but the sea was still unsettled.  He became afraid once again, and began to sink.

“But when he saw that the wind was boisterous, he was afraid; and beginning to sink he cried out, saying, ‘Lord, save me!’  And immediately Jesus stretched out His hand and caught him, and said to him, ‘O you of little faith, why did you doubt?’ ”  Matthew 14:31

Yes, why did he doubt?  Why do we doubt?  We too have seen tumultuous times in our lives.  And we have said we trust Jesus, yet still we doubt.  Still we will not believe.  But like Peter, we have seen Jesus come through for us, over and over again.

He is Our Hope.  He does not need to be challenged to prove this to us.  He has demonstrated His power, His grace, and most of all, His love towards us.  He saved Peter from the waves; consequently, He also saves us from the waves in our lives, and the result is eternal life in His presence.  Jesus SAVES!

This is what Our Hope is all about. Let’s not be afraid to get out of that boat and walk on the water.  If we fail to get out of the boat, we will miss opportunities of grace, joy, and celebration.  We will not show Jesus that we do trust Him, and only Him.  Remember, Jesus has His hand out to catch us if we fall!

When have you had to get out of the boat when the waters were scary?  Please comment below or go to www.mystoryofgrace.com and share your experience with us.

belief and trust Challenges Who He Is come fear can affect our ability to serve God Feeding the Five Thousand flesh sees a ghost or a demon He is walking on the water! Healing disease It is I; do not be afraid Jesus commands Peter to come to Him on the water Jesus has His hand out to catch us! Jesus saves Our Hope: Get Out Of The Boat! the disciples had seen His power the sea and its troubled waters The Sea of Galilee there is no basis for fear we are today's Peter we face fear Why do we doubt? www.mystoryofgrace.com 2015-06-20
Lili

Tags belief and trust Challenges Who He Is come fear can affect our ability to serve God Feeding the Five Thousand flesh sees a ghost or a demon He is walking on the water! Healing disease It is I; do not be afraid Jesus commands Peter to come to Him on the water Jesus has His hand out to catch us! Jesus saves Our Hope: Get Out Of The Boat! the disciples had seen His power the sea and its troubled waters The Sea of Galilee there is no basis for fear we are today's Peter we face fear Why do we doubt? www.mystoryofgrace.com

Lili lives in central North Carolina. She writes devotionals and Christian articles and has been published in e-magazines, newsletters, and articles. She is a member of Faithwriters.com. She and her husband Chuck love to travel, and are animal lovers as well. They are active in their local church. Lili credits God for any inspiration that allows her to write. It's all about Him!
@@ohiolili
Previous Prayer–The Power for Charleston
Next Why Should I Be Still and Know God?