Breaking News
Home / Our Hope / OUR HOPE: The Church Shall Endure 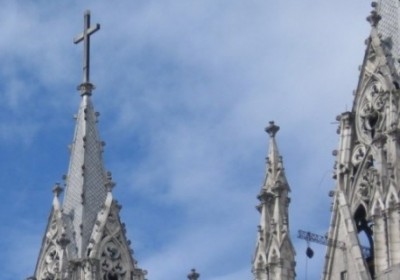 OUR HOPE: The Church Shall Endure

‘Here is a trustworthy saying: if we died with Him, we will also live with Him; if we endure, we will also reign with Him.  If we disown Him, He will disown us; if we are faithless, He will remain faithful, for He cannot disown Himself.’   2 Timothy 2:11-13 (NIV)

When Jesus established His church, He did so with the knowledge that it would endure.  He told Peter that He was building His church on this rock, and that the gates of Hades would not overcome it.  Would you not say that He intended endurance right from the very beginning?

We live in very troubled times.  There are major crises all over the world.  A very real tragedy taking place right now is the execution of Christians in many countries.  If they will not convert, they are killed.  Men, women, and children.  They are sacrificing their lives because they believe in the one true God.

The war between Israel and it’s Middle East neighbors has escalated to new heights.  And many in our own country, which at one time was Israel’s strongest ally, are now blaming the unrest on Israel, not those who have attacked that country.  If we watch the events as they have been unfolding for the past several decades, we will realize how this all lines up with the Word of God.

Now, back to the church.  The church is the Bride of Christ.  Thus, when He returns for us, we will ascend with Him into the heavens, truly as His bride.  But before that time comes, we will see more of what we see now.  As the Bride, we are to be spotless, without blemish.  We are to stand, to live by faith, and to trust in the promises of God.  Regardless of how it looks, despite the fear and chaos that may ensue during these troubling times, we are to stand in unity, until the very end.  And the end may be when we are changed in an instant and rise in the air, or it may come when we sacrifice our lives for the cause of Christ.

The church is much more than a building…it is a people.  The people are from all over this world, united in the faith and the belief that Christ is our King.  The church will stand, and we who are of it will walk this earth without fear, reaching out to those who do not know Christ, and living in victory until the day we go home to Heaven.  We know Jesus will not allow it to fail.  We know it will indeed endure to the end, because Jesus is Our Hope, and His endurance is what gives us strength to endure all things in His name.

‘From Him the whole body, joined and held together by every supporting ligament, grows and builds itself up in love, as each part does its work.’ Ephesians 4:16 (NIV)

Lili lives in central North Carolina. She writes devotionals and Christian articles and has been published in e-magazines, newsletters, and articles. She is a member of Faithwriters.com. She and her husband Chuck love to travel, and are animal lovers as well. They are active in their local church. Lili credits God for any inspiration that allows her to write. It's all about Him!
@@ohiolili
Previous Is Music Choice Really that Critical, Part 2
Next How To Enjoy Your Life