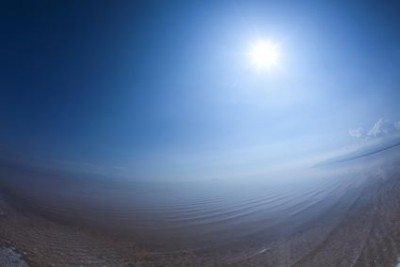 Down through biblical history God has judged nations. In Genesis 12:2-3 God told Abraham, “I will make you a great nation…And I will bless those who bless you, and the one who curses you I will curse…” Iran has said that they intend to “wipe Israel off the map.” A recent headline quoted an Iranian commander: “We’re Getting Prepared to Overthrow Israel.”

Is God beginning to lower His hand of judgment against Iran? It has been confirmed by Iranian officials that a devastating meteor struck their nation on July 31, 2015. Major damage was done in the province of Qazvin, with large pieces also landing in other places. The Iranians view this as being a sign of the return of the Muslim messiah, Mahdi, Mohammed’s successor, who will bring peace and justice to the world. Many other people, especially Christians, might see this as God’s judgment.

Does God use weather and astronomical events for such purposes? Biblical prophecy says so. Revelation 8:10 says “…a great star fell from heaven, burning like a torch.” This particular event is not connected with this verse because it says it fell on a third of the rivers. However, is it a display of worse things to come?

The exact same day, July 31st, the Iranian city of Bandar Mahshahr had a heat index of 164 degrees. Another place in the country encountered 120 degree heat for one entire week! Again, we turn to the Book of Revelation where we read in 16:9 that people will be “scorched with fierce heat.”

In the end times God is going to judge nations for thumbing their nose at him. Psalm 2:1-5 has this to say: “Why are the nations in an uproar, and the people devising a vain thing? The kings of the earth take their stand, and the rulers take counsel together against the Lord and His Anointed…He who sits in the heavens laughs, the Lord scoffs at them. Then He will speak to them in His anger and terrify them in His fury.”

Will America be next? We have a president who has snubbed Prime Minister Netanyahu, and a Congress that will likely take sides against Israel in the Iranian nuke deal. A recent headline I came across reads: “Analysis: Palestinians Prepare Drastic Moves Against Israel and Obama Might Help Them.”

Do you believe that these two events were just a coincidence or the judgment of God? A meteor and heat wave are not supernatural in and of themselves, but the fact that they both occurred in Iran on the same day makes me think that quite possibly God had something to do with it. What are your thoughts?

Tags a great star fell from heaven burning like a torch a meteor and heat wave at the same time in Iran devastating meter strikes Iran Does God still judge nations? Genesis 12:2-3 Iranian nuke deal Is God judging Iran? Is God's fury and wrath focused on Iran? Psalm 2:1-5 the nation that curses Israel God will curse

John Livingston Clark is 67 years of age and lives in central Washington State. He has written two published books, and two published poems. His initial book is called, " God's Healing Hope: Breaking the Strongholds of Wrong Thinking." His second book, released in December of 2016, is a motivational book written to seniors titled, " Seniors: Are You Retiring or Recharging?" Both books are available on amazon. You can also view his writings on www.faithwriters.com. John is available to speak on a variety of topics. Visit me at jclarkministries.com
Previous If Government Is To Keep Order, Why All The Chaos?
Next There is No Power in Prayer