Breaking News
Home / Politics / The Caravan – A Crisis In The Making? 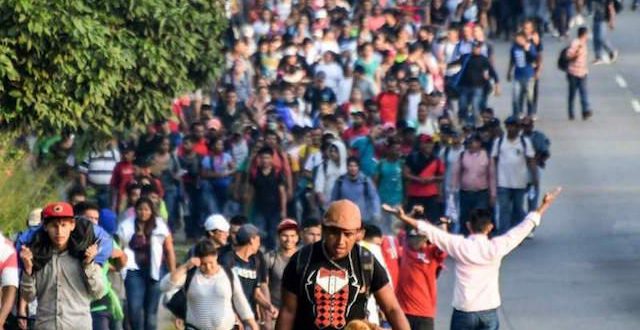 The caravan has begun to arrive at Tijuana, the Mexico town just across the border from San Diego. People are being provided temporary shelter at a gymnasium and sports complex. At the same time some locals are yelling, “Go home. We don’t want you here.” What is next? We will just have to wait and see how this unfolds.

As members of the caravan  came up to the high metal fence that separates Tijuana from San Diego, with border patrol officers on horses, in trucks, and on motorbikes, one migrant was reported to have said, “I didn’t expect it to be like this.”  Well, how did he expect it to be? Reportedly, some have already tried to enter illegally. The border patrol is saying that if anyone comes in at all, he or she will have to wait their turn in line until their name is called. With thousands of them converging upon the town this could take months because only 100 applications for asylum are processed per day. The border patrol is taking the position that there is no way there will be a mob of immigrants coming into San Diego.

The need for strict vetting of each individual is proven by the fact that, though most are probably good and decent people in search of a better life, there are some who have evil intentions. In October, 100 ISIS terrorists were caught mingled in with the caravan, and arrested. Aren’t we glad they did not get to our border! To drive home this issue further consider the following headline: “Yes, Unvetted Illegal Caravans Threaten Public Health.”

In the meantime, Francisco Gomez, secretary of Baja California, said, “We are providing them with humanitarian support, health care, and food, however the need to take into consideration the rules of the shelters so they can coexist in harmony with the local population.”  Some complained about being in a shelter, liking it to a prison and calling it oppressive. This is ironic in that they came all this way to get out of an oppressive country! Also, one would think that they would be very happy, considering all they have been through, to have a roof over their heads, a place to sleep, with food and health care provided. As a result, some chose to camp on the beach and stay in the streets, which has caused altercations with local residents.

There is also the concern of too many immigrants becoming an economic burden. We already have enough to deal with. Texas Lt. Governor, Dan Patrick, said, “We have desperate people in our own country that we need to take care of…We cannot educate, medicate, and incarcerate the whole world. There are millions who would come here, and we wouldn’t have a country left to help anyone.”

Yes, America is a nation of compassion, but with that comes responsibility. At what point does compassion to strangers become so important that one neglects the needs of one’s own citizens? What family would help a stranger in need at the expense and sacrifice of a wife or husband or child in their own household?

What should be a biblical and Christian response to the caravan? While the Bible teaches compassion it also teaches personal responsibility. I John 3:17 says, “But whoever has the world’s goods, and beholds his brother in need and closes his heart against him, how does the love of God abide in him?”  On the other hand we read in I Timothy 5:8, “But if anyone does not provide for his own, and especially for those of his household, he has denied the faith, and is worse than an unbeliever.” We are a “family” of Americans that has been blessed with the “world’s goods” with a desire to help people in need. We also have an obligation to provide for the needs of our own “family of citizens.”

There are many great immigrants who have come to America. They are wonderful people.  I know. I live in central Washington State where we have thousands of Mexicans and others who have come from Central America. They work hard in the fruit industry which helps grow much of this nation’s food. By doing so, they contribute to the culture and economy.

The people in the caravan need to understand that America has a responsibility to its own people first. They must also recognize the need for coming here legally, and once they are here, respect our values from the very moment they set foot on our soil! The ones who demonstrate good attitudes and actions toward this nation are most apt to be greeted with “Welcome to America.”

What would you say to a person who wants to come to the United States?

John Livingston Clark is 67 years of age and lives in central Washington State. He has written two published books, and two published poems. His initial book is called, " God's Healing Hope: Breaking the Strongholds of Wrong Thinking." His second book, released in December of 2016, is a motivational book written to seniors titled, " Seniors: Are You Retiring or Recharging?" Both books are available on amazon. You can also view his writings on www.faithwriters.com. John is available to speak on a variety of topics. Visit me at jclarkministries.com
Previous The Unthankful Turkey
Next He Loves Us Enough