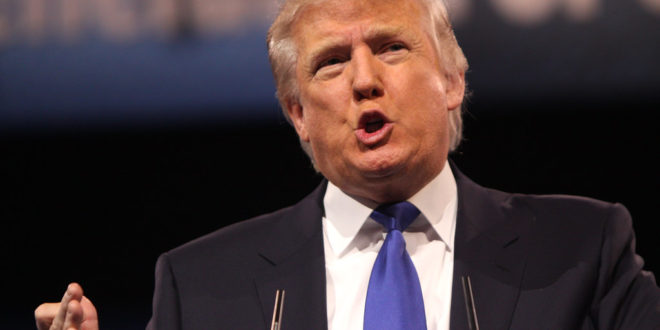 What Kind of Christian is Donald Trump?

Donald Trump continues to lead among Republicans in the polls. As with most candidates religious beliefs and practices can be an issue. With this goes the question: “Does one want a president who is a strong leader or who shares one’s faith and belief in God? Is it possible to have both? Trump has disappointed some because of his comments on social issues, and his criticism and name calling of others. But no presidential candidate is perfect. I am not saying this to justify his actions and words, but only as a reminder that everyone has flaws. When one looks at his professing Christian faith, let’s don’t hold him up to a higher standard than those sitting in the church pews, for even those who have a personal relationship with Jesus Christ are sinners saved by grace.

Aside from how Trump is seen as a potential leader for America, what kind of Christian faith does he have? Here are some facts:

1. He is associated with a Protestant denomination and said he would be “the greatest representative that Christians have had in a long time.”

2. He has made religious persecution an issue in his campaign.

4. He is for traditional marriage and pro-life.

5. He recognizes God as the sovereign being. David Brody, political correspondent for CBN, asked Trump on one of “The Donalds” golf courses, “Who is God to you?” After talking about the great deal he made on the golf course, he gave the unexpected reply, “…God is the ultimate. You know, just look at this…here we are on the Pacific Ocean. How did I ever own this?… I mean, God created this, and here’s the Pacific Ocean right behind us. So nobody, no thing, there’s nothing like God.”

Trump has been mocked for not giving a favorite Bible verse, and to that I say, “So what.” How many people who claim to be Christians are even reading the Bible?

Some Christian leaders, even a few evangelical pastors, are supporting Trump. They recently met with him in his office in the Trump Tower to pray over him, asking God to give him a successful campaign because he “cares deeply about America.”

Does this nation want a biblically-literate squeaky-clean Christian for president, or a strong leader? It appears to me that Donald Trump is just as much of a Christian as some of those sitting in our churches. Only God knows if he has a personal relationship with Christ.

What are your thoughts about Trump’s Christianity?

(This is not an endorsement of Trump for president by either the author of this article or by TBL Ministries.)

John Livingston Clark is 67 years of age and lives in central Washington State. He has written two published books, and two published poems. His initial book is called, " God's Healing Hope: Breaking the Strongholds of Wrong Thinking." His second book, released in December of 2016, is a motivational book written to seniors titled, " Seniors: Are You Retiring or Recharging?" Both books are available on amazon. You can also view his writings on www.faithwriters.com. John is available to speak on a variety of topics. Visit me at jclarkministries.com
Previous Which Wolf Are You Feeding?–The Battle Between the Spirit and the Flesh
Next How to Remain in Peace Under Adverse Circumstances