Breaking News
Home / Politics / Before God and Man: Which Oath Will You Honor? 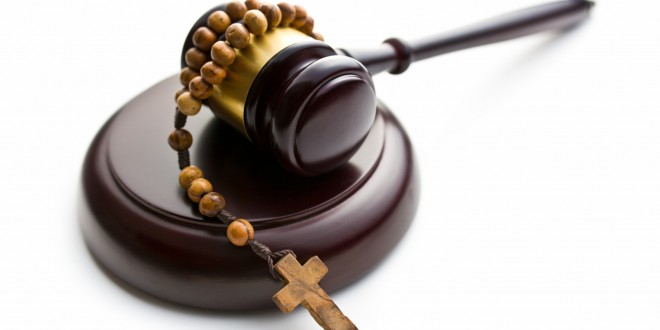 Before God and Man: Which Oath Will You Honor?

ARTICLES IN ADDITION TO, AND AMENDMENT OF, THE CONSTITUTION OF THE UNITED STATES OF AMERICA, PROPOSED BY CONGRESS, AND RATIFIED BY THE SEVERAL STATES, PURSUANT TO THE FIFTH ARTICLE OF THE ORIGINAL CONSTITUTION

AMENDMENT [I.] 2 Congress shall make no law respecting an establishment of religion, or prohibiting the free exercise thereof; or abridging the freedom of speech, or of the press; or the right of the people peaceably to assemble, and to petition the Government for a redress of grievances.

On August 7th, 2015, the Ohio Supreme Court’s Board of Professional Conduct informed Judge C. Allen McConnell that the June 2015 ruling in Obergefell v. Hodges, US Supreme Court (by a slim 5-4 majority) takes precedent over his 1st Amendment Right. It is our protection of the free exercise of our religious convictions. It seems an odd position given that a judge is sworn to uphold the Constitution.

This leads us to deduce that just about anyone can be forced to embrace the agenda or suffer the consequences. This includes those who wish to serve in government, become an officer of the court or a military chaplain … or those who take pictures, bake wedding cakes, make floral arrangements or cater receptions.

Judge McCullen said he accepts the opinion and the clarification of his responsibility. He says he will abide by the opinion and has apologized to the couple that he refused to marry. Public officials evidently must now forsake their own convictions for the sake of gay rights.

I find it interesting that the Ohio Judicial Oath of Office, pursuant to Revised Code 3.23, concludes with [This I do as I shall answer unto God.]. Apparently taking an oath to God is acceptable–as long as you don’t try to live by it.

Ephesians 6:14  “So stand up and do not be moved. Wear a belt of truth around your body. Wear a piece of iron over your chest which is being right with God.” (NLV)

Will you choose to go along to get along? Or will you be sporting your spiritual armour, defending God’s truth?

Melinda is currently the worship leader at her small church in rural America. Married for 23 years, she and her husband Larry have one son. She is the Director of Mailing in the print/mailing industry by day and freelance author by night. Her desire to write is a passion borne from tragedy. God used it to take her faith to a much deeper level. Melinda is a freelance writer and member of FaithWriters. She joined the TBL team in March 2014. Believing we are citizens of a greater ‘kingdom,’ her articles for The Bottom Line examine governmental responsibility, citizen involvement and current political topics. With the great wisdom contained in scripture as her guide, she looks at today’s political environment from a Biblical perspective. She prays her words will prompt the reader to view citizenship - and every aspect of their life, through the eyes of faith. Col 3:17 To read more of Melinda’s writings on her faith, hope, and life visit her blog Still Living Still Loving or her page at Faithwriters.com. You can also follow her on Twitter @MKZbk.
@@MKBzk
Previous Our Hope: Sing and Make Music
Next The Dangers of the Pan-sexual Agenda Part 1: What is Pan-sexuality