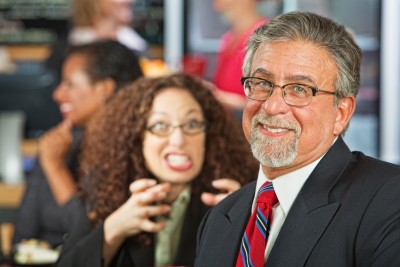 It is human nature to complain and criticize but, of course, we know that the Bible clearly instructs us not to. There are many reasons why this sort of behavior should be avoided at all costs–it is hurtful, whether it is said to a person face-to-face or behind his back it promotes more complaining, and it tears at the foundation of your relationships.

After God, your spouse is meant to be your closest companion, friend, and helpmate. When God made Eve, she was created to be a helpmate to Adam. God designed her from man to cleave to man. This is what Jesus said to the Pharisees in Matthew 19:4-6 about husbands and wives:

“He [Jesus] answered, ‘Have you not read that he who created them from the beginning made them male and female, and said, ‘Therefore a man shall leave his father and his mother and hold fast to his wife, and the two shall become one flesh’? So they are no longer two but one flesh.’ ” Matthew 19:4-6 ESV

And in the Old Testament:

So the Lord God caused the man to fall into a deep sleep; and while he was sleeping, he took one of the man’s ribs and then closed up the place with flesh. Then the Lord God made a woman from the rib he had taken out of the man, and he brought her to the man. Genesis 2:21-22 NIV

Why did God take Eve from within Adam’s own flesh? God had, up until this time in creation, made every living thing, including Adam, from “the dust of the ground.”

“Now the Lord God had formed out of the ground all the wild animals and all the birds in the sky.” Genesis 2:19

We know that God could have made Eve from dust as he did Adam. He did this so that they could become one.

“That is why a man leaves his father and mother and is united to his wife, and they become one flesh.” Genesis 2:24

“The man said, ‘This is now bone of my bones and flesh of my flesh; she shall be called ‘woman,’ for she was taken out of man.’ ”Genesis 2:23

This picture of the relationship of a man and his wife is losing popularity, it seems; perhaps I am being cynical, but this I do know from personal experience: when other women complain about their husbands, I think of something to add to the conversation–not good things, but flaws.

When did husband bashing become so popular? I expect it is not a recent sport, but an ancient one. Don’t you suppose Peter’s wife complained to the other wives, as they washed the laundry down by the river, about him tracking mud all over the floor and smelling like fish?

Even Mary, the mother of Jesus, surely once or twice in exasperation, said to Jesus or his brothers that she wished Joseph would come home from the workshop just once for dinner before it got stone cold? Did Sarah threaten to burn Abraham’s sandals the next time he left them right where she could trip on them? Probably that or something else. But pervasiveness does not make righteousness.

Presenting your husband in an unflattering way, to anyone, is to go against what God desires from you as a wife. Wives are to honor and love their husbands. When wives denigrate their husbands behind his back they are assassinating his character.

First Corinthians 13, better known as the “love chapter,” packs several “punches” about what love should look (and sound) like and verse five has four descriptions in the span of 20 words, all of them applicable to our subject. I will touch on the first 2 here and cover the others next time.

“It [love] does not dishonor others, it is not self-seeking, it is not easily angered, it keeps no record of wrongs.” 1Corinthians 13:5 NIV

It does not dishonor others. This is self-explanatory; if you malign your husband behind his back you are dishonoring him. It is not self-seeking. This one might be a bit harder to see for some. I will use myself for an example. I have a well-developed sense of humor, but sometimes it’s not funny even when it is–and this is where we must be careful. Humor, when used as a weapon, is extremely un-funny. I will explain …

When the bashing is in full swing and my turn comes around I might say, “Seriously, it’s so funny to see him walking around in the yard in just his underwear and a pair of camouflage Crocs!”

My “adoring fans” will get a big kick out of this and life goes on, no harm no foul, right?  Not really; not in God’s eyes. I am taking something private in a way, and broadcasting it to everyone within the sound of my voice.

It doesn’t matter, right? I am just kidding around, right? But, what if? What if my husband could hear me; what if it gets back to him? How would I feel if the tables were turned? Would I accept the same excuse that I would give in that place? Not likely.

We must use our spiritual eyes and minds to control what the Bible calls in several places, and in different terms, the hardest part of the body to control–the tongue.

Proverbs 18:21 is particularly forthcoming saying, “Death and life are in the power of the tongue, and those who love it will eat its fruits.” (emphasis mine) Yikes!

Proverbs 15:4 is perhaps a lesser known verse and says, “A gentle tongue is a tree of life, but perverseness in it breaks the spirit.”

The very things we consider harmless might be eroding the foundation of our marriage one grain of sand at a time. You may not notice today, but someday the house will fall.

If you struggle with “husband bashing,” what is something you can do today to change this behavior?

Previous Questions Atheists Tend to Ask, Part 5
Next An In-depth Look at the Christian Book, “Beyond Belief”