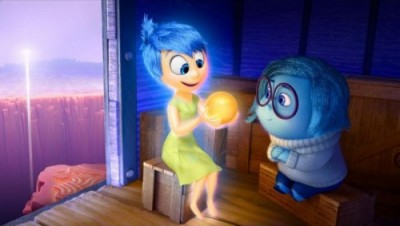 Joy Sadness Inside Out

An Important Lesson from Disney’s “Inside Out”

**SPOILER ALERT** This article contains some minor spoilers. Be forewarned!

Of all the movies I’ve recently seen, Inside Out ranks among my favorites. In fact, it just might be the best animated film I’ve seen since Finding Nemo. Rarely do I choose to see a movie more than once, but Inside Out will have me coming back for more.

Why? Well, aside from all the reasons I mentioned in my article about why we’re drawn to animated films, Inside Out was well written, well thought out and smart. The producers, directors, writers and story board artists dealt with the complexities of emotions in a fun and entertaining way, while bringing new meaning to core, short-term and long-term memories. To be frank, it was brilliant.

Without revealing too many details, Inside Out left behind several messages that are worth discussing, but this one stood out among the rest: It’s okay to be sad.

In the very beginning the audience meets Joy, the character inside 11-year-old Riley’s head who is tasked with keeping her happy. She ensures good memories are made, fun times are had, and love abounds. But sometimes Anger, Fear, Disgust and Sadness influence Riley’s behavior. They aren’t bad characters, but they can go a little hay-wire at the control board based on how they process and understand what’s happening around Riley—which changes as she ages. But like all emotions, they have their place: Fear keeps Riley safe, Anger feeds Riley’s competitive edge on the ice rink, and Disgust reminds Riley that she has an unpleasant relationship with broccoli, for example.

Joy keeps the peace, and in some ways, doesn’t appreciate the roles the other characters play: this is particularly true of Sadness. It isn’t until we see Bing Bong, Riley’s imaginary friend, experience a loss that we learn that Joy doesn’t always have the answers. In the aforementioned scene, Bing Bong loses something very special and reacts by plopping down onto the floor and sobbing. Joy, in her bubbly, extroverted way, rushes over and immediately tries to distract him. She tries to tickle him, make jokes, thwart his attention—anything to get the good vibes flowing.

It isn’t until Sadness (Inside Out’s Eeyore) saunters over that things start to look up. She sympathizes with him. She shows compassion and understanding and doesn’t minimize his feelings. Eventually the two hug, get up and continue on their way.

Sadness had a place. She had a very important role to play.

Sadness understood the importance of this, and I love that Disney and Pixar made it a point to let kids know that, yes, it’s okay to be sad. Feelings, no matter how confusing, are important.

The legacy of this lesson continues when, toward the end of the movie, Riley confesses to her parents that she can’t be the happy girl they know and love because she misses her home state of Minnesota. Their reaction? Empathy. They acknowledge her feelings and share memories of what they miss most. Because, like her, they miss Minnesota too.

If you haven’t seen the film, grab a tissue before you head out the door . . . just sayin’.

But if you have seen the movie, tell us: What did you take away from it? What do you think is the most important lesson we can learn from Disney’s Inside Out?

is a freelance writer and contract copywriter who lives in the seacoast region of New Hampshire with her husband, Eric-Thomas,of five years. She currently serves alongside her mother as the Marketing Director for God’s Girls Christian Store and More, a online retail store serving the southern New England region. Her work has been featured in several print and online publications, and she is the recipient of two Faithwriters’ Editors Choice Awards for her short stories, which are scheduled for publication in the Mixed Blessings series. Her first book, Fragile: 30 Days of Hope for the Anxious Heart, is now available at samanthaarroyo.com. She can be reached at [email protected].
Previous The Way Forward: Clear Vision for the Road Ahead
Next Jesus is Our High Priest