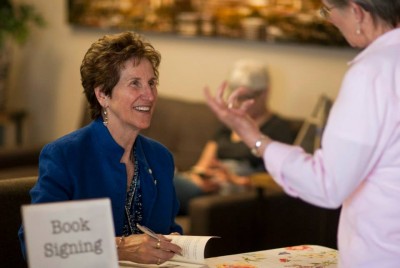 Francine Rivers at a book signing in June. Courtesy of Facebook.

She has captured the hearts and minds of readers for decades. Francine Rivers, the author of more than 20 Christian fiction novels, received the Lifetime Achievement Award on September 19 at the American Christian Fiction Writers (ACFW) Awards Gala.

“Few people have had the kind of impact that Francine Rivers has had through her Christian fiction,” ACFW CEO Coleen Coble told Christian Retailing. “Many readers mark her books as spiritual turning points in their lives.”

A frequent flyer on the “bestseller” list (including the New York Times bestseller list), Rivers’ books have earned their share of trophies and plaques, including the RITA Award, the Christy Award, the ECPA Gold Medallion, and the Hold Medallion in Honor of Outstanding Literary Talent.[1]

Coble went on to say that “The ACFW awards—both for writing excellence and for outstanding service to the writing community—spotlight those among many who are making a difference through the way they live for Christ as well as their role in the Christian publishing world. It is ACFW’s great privilege to honor these individuals through the recognitions they receive.”

Many readers have credited Rivers’ works of fiction for propelling their spiritual growth. And it isn’t surprising, especially when one learns that Rivers’ plot ideas come from questions she has struggled with as a believer. Each book, despite being fiction, has led her on a quest to find God’s answers to each of those struggles.[2]

Among the dozens of titles she’s written include A Voice in the Wind, Bridge to Haven, The Atonement Child, The Scarlet Thread and her personal favorite, Redeeming Love—her first novel as a born-again Christian.[3]

Agents, editors and mentors were awarded that same evening, and the Carol Awards for the best in Christian fiction (published in the previous calendar year) were also announced.[4]

Despite the number of accolades Rivers has received, when she first learned of the honor in July, she was humbled.

“When I first received the call from a friend, I didn’t know what to say,” she wrote on her website. “I’m still trying to find the words to express what I’m feeling.  Honored—yes.  Aware there are others more deserving—absolutely.  Scared—oh, yeah.”

Believe it or not, she still considers herself an apprentice, she says, having a lot to learn not just about the writing craft but about living the Christian life in a fallen world. And in typical Rivers’ fashion, she credits those around her—her husband, family members, agents, writer friends, editors, church friends and publishing-house teammates—with her success.

“When the evening comes to receive the award,” she wrote, “you’re all right there with me, sharing in it.”

When the news hit Facebook Monday morning, fans were ecstatic. Dozens took a moment to extend their congratulations, while others expressed how Rivers impacted their lives:

“One of my favorites of Francine’s books is ‘Redeeming Love’ so helped bring healing to me when I read it years ago.”

And still others credited Rivers as an author and as a woman of God, saying:

“Well deserved. She turned the tables on her life issues, embraced vulnerability and gave her best gifts fully to God’s work. God will yet REWARD you dear, dear woman of God!”

“I am not surprised, Francine because you are one of my favorite authors! You are full of anointed by God with blessings. You are a woman of God!”

So what’s next for Rivers? Well, it would seem writing is certainly in her future as readers are chomping at the bit for her next release. In the meantime, we have a feeling God is smiling down on this Christian fiction’s well-known author and whispering, “Well done, good and faithful servant!” (Matthew 25:23).

is a freelance writer and contract copywriter who lives in the seacoast region of New Hampshire with her husband, Eric-Thomas,of five years. She currently serves alongside her mother as the Marketing Director for God’s Girls Christian Store and More, a online retail store serving the southern New England region. Her work has been featured in several print and online publications, and she is the recipient of two Faithwriters’ Editors Choice Awards for her short stories, which are scheduled for publication in the Mixed Blessings series. Her first book, Fragile: 30 Days of Hope for the Anxious Heart, is now available at samanthaarroyo.com. She can be reached at [email protected].
Previous Why I Have A Faith that Can Move Mountains
Next Making Moments Matter: Investing Time With Your Kids Part 2 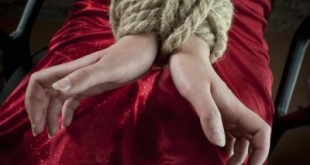