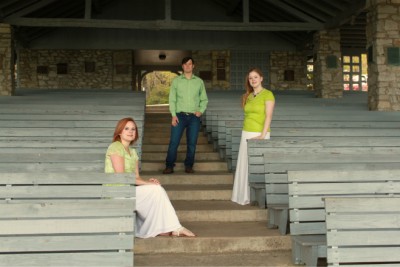 In 1991, siblings Mark Dibler, Matt Dibler and Robin Garlick—along with their spouses Lisa Dibler, Paulette Dibler and Bob Garlick—formed a Southern Gospel singing group called Family Harmony. For many years the group traveled the country, seeking to reach out to the lost and to inspire the saints with their encouraging music. Over time, however, God began to place a different call on each of their lives and each couple went their separate ways to fulfill the various ministries to which God had called them.

Despite the separation, the name Family Harmony lived on as it was adopted by Mark and Lisa Dibler who, with the aid of their four children, had formed a new singing group. Over the next few years, the family shared their talent with many churches, hospitals, nursing homes and hurting families, and the children grew up and began having families of their own.

For the past several years, the four children—Rebecca, Mark, Deborah and Michael—have traveled around the country, fulfilling the biblical call given in Ephesians 5:19:

Speaking to yourselves in psalms and hymns and spiritual songs, singing and making melody in your heart to the Lord.

They have touched lives and encouraged hearts, all the while living out their dream of a life of musical service to the Lord. A dream that they all shared … except for the youngest, Michael.

In his final year of high school, Michael became a man and received peace from the Lord about leaving the group. While he enjoyed the singing and the opportunity to meet new people, his heart wasn’t in it like his siblings’ were. He had other goals and dreams, so earlier this year, he chose to leave the group to pursue other types of ministry—a choice of which his family is very supportive.

During this transition time, the group was already considering a name change. Because the Family Harmony title had been passed down for so many years, there was some confusion among those who booked the group thinking that they were the original group. For this reason and the fact that the group had taken on a newer, fresher sound, the Dibler family felt that a name change was in order. With the release of their newest CD this summer, they made the name change official. Family Harmony is now Abishai, based on II Samuel 21:17.

But Abishai the son of Zeruiah came to his aid and attacked the Philistine and killed him. Then David’s men swore to him, ‘You shall no longer go out with us to battle, lest you quench the lamp of Israel.’ ”

Despite the many changes of late, the legacy of Bible-based music lives on as these young people strive to use their talents for the glory of the Lord. Based out of Bible Baptist Church in Pickens, SC, Abishai is dedicated to their mission of evangelizing the lost, edifying the saints and living up to their new name.

More details about the group, as well as booking information, can be found on their website, www.abishaimusic.com.

In what unique ways has God gifted you to serve Him?

Dana is a full-time Christian author and speaker residing in Greenville, SC with her husband and two dogs. In fulfilling her call to evangelize the lost and edify the saints, Dana spends her days writing devotions, devotional books and books for children, as well as recording podcasts on various Biblical topics. She serves in many capacities at her local church, including the roles of church pianist and ladies' Sunday School teacher. Dana has a passion for souls and longs to be used of God in whatever way He deems necessary. When not writing or serving at church, Dana can most likely be found reading or hiking a nearby trail.
Previous Realistic Expectations: Your Husband Is Not Jesus Jr.
Next A Christian Alternative to the Boy Scouts: Trail Life USA