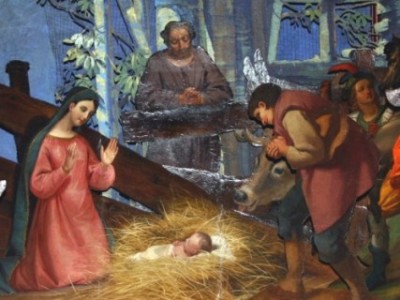 Churches, are you doing the Nativity right?

Earlier this week, I had a depressing conversation with a co-worker.  My co-worker described to me that his church was not doing their usual “Living Cross” play.  The play reenacts the events leading up to, during, and after the birth of Christ.  The church has done the play for many years now, but due to the budget, they are unable to carry it on this December.

You would assume that the budget held no money at all to put on the play, but sadly this is not the case.  The true reason the play has been cancelled is because they don’t have the budget to make it as ‘grand’ as they always have.  Each year, my co-worker’s church has spent many thousands of dollars on high quality lighting, intricate set designs, elaborate costumes, and even on guest singers/performers.

The leaders reasoned that if they ‘couldn’t make it as spectacular’ as previous years then there is no point in doing it this year.  Sadly, this may be one example of many other churches that may have lost the true reason of such a play.  It isn’t to make a Broadway-esk production with lights, sets, detailed costumes, an orchestra, and amazing acting.  It is to reenact the miracle and blessing of the birth of Jesus Christ; the baby who would one day be our Savior!

Please know, I am not saying that every church that has a production like this is doing it wrong.  There are many churches I can name that have the budget and use it affectively to put on an iconic portrayal of Jesus’ birth.

The problem at hand is that the Nativity story has turned more into an entertainment feature at church instead of an opportunity for sharing the ‘Good News’ to the lost.  During this Christmas season, many churches will be filled with lost souls.  Even without putting on an extravagant show, churches can still portray the true story of the manger scene and the events surrounding it.  Let us not let our pride interfere with what God wants to do in the lives of others.

Although graduating with a Communications degree from Liberty University in 2008, I took a long break from writing until finishing my Master's in Education this past year. I currently reside in Lynchburg, Va with my wife and two children. By day, I work in insurance and by night I am a writer. When not playing with my kids and spending time with my wife, I enjoy spreading God's word through my writing.
Previous Your Appointed Work
Next Fulfill Your Purpose