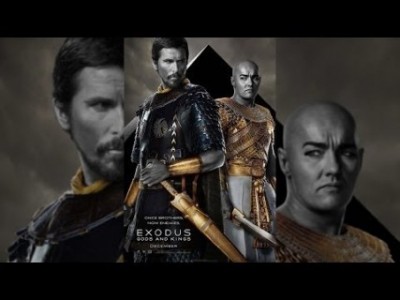 Over the last several years, there has been a growing push to develop mainstream movies that depict the epic events of the Bible.  It has been a decade since we saw Mel Gibson’s take on Jesus’s crucifixion in The Passion of The Christ.  We have seen the television series come out simply entitled, The Bible.  This past year, Paramount Pictures rolled out its Hollywood take on the great flood in Noah.  And now we come to the upcoming release of Exodus: Gods and Kings which depicts the story of Moses.

Prior to seeing the movie, many Christians probably have the same take as I did with Noah; that it will not hold to the true biblical story.  From the previews shown so far, we can see that the movie will depict many icon scenes.  These scenes will portray the ten plagues of Egypt along with at least one huge fight scene and, of course, Moses’ encounter with the burning bush (God).

From the trailers it appears that Moses, played by Christian Bale, is a rough and barbaric man bent on freeing his people by any means necessary.  Bale was criticized early on when he described his character as a “schizophrenic” and “barbaric” prophet.  Obviously, this enraged the Christian community.  I, for one, saw this as another poor version of an iconic story of the bible that would have great special effect, huge fight scenes, but no biblical truth.

Then, Bale did his research.  He spent some time and read through the book of Exodus and then read the Torah.  Soon after, Bale changed his understanding of the character citing that Moses “was intelligent enough to have self-doubt” for the task God had commanded him to do.  Christian Bale goes on to say that Moses “asked for someone else to do the job” and that he “didn’t know how he was going to accomplish the task.”

Although Moses is played by a lost man in Bale, it is refreshing to see that he has a better understanding of the story and character’s motivation and feelings.  I am not expecting the movie to reenact the exact events described in Exodus, but I am anxious to see Bale’s interpretation of Moses unfold on the screen.  Exodus: Gods and Kings is set to open Friday, December 12th.

Although graduating with a Communications degree from Liberty University in 2008, I took a long break from writing until finishing my Master's in Education this past year. I currently reside in Lynchburg, Va with my wife and two children. By day, I work in insurance and by night I am a writer. When not playing with my kids and spending time with my wife, I enjoy spreading God's word through my writing.
Previous Mercy On Life’s Stormy Sea
Next Whose problem is it?