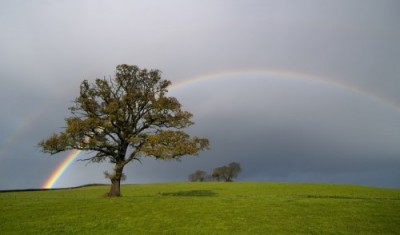 Two little buzz words, “Noah’s Ark”, are heating up Hollywood and the Evangelical Christian world these days as Paramount Pictures releases “Noah”-a biblically inspired film on the life and times of Noah.

Inspired is the key word here, but instead of arguing about Hollywood’s artistic licensure and its multitude of inaccuracies from the true story, the root question should be-Did they even get the main prop in their set right when comparing the ark to the biblical account?  Truth be told, I had to do a little digging before I could give a fair and valid opinion.

The first part of my research led me to the featurette that focuses on the ark’s construction.  Director Darren Aronofsky explained that the scope of the ark was found in the bible. “He (God) basically describes a box.  It doesn’t talk about a bow… It just basically has to survive the flood.” Aronofsky’s comments had me puzzled.  A box?  Really? In all my life, I have never imagined the ark of Noah being just a box.  After all, it saved Noah and his family.

In addition, Production Designer Mark Friedberg summed up the team’s overall vision for the ark “I wanted very much this arc to be an act of desperation. The craft of this arch will be very rough and rugged and that idea gives the arc its vitality the sense that doom is impending people are really working quickly to try and make something so they can survive”.  But the arc was not built out of desperation nor did Noah believe he was doomed; it was built out of faith because “Noah found grace in the eyes of the Lord” (Genesis 6:8), and God found favor in Noah and called him righteous not desperate. (Genesis 7:1).

I had to get to the bottom of this mystery, so I started with the three-letter word, which seemed to be the heart of the question.  A…R…K… A few clicks later, I found some interesting pieces to my puzzle stemming from the Website WorldWideFlood.com.

The English word for “ark” is a Latin derivative of “arca”-a large box or chest, and this word was originally translated from the Greek word “kibotos” which means the same.  Hmmm, could Aronofsky be correct?  Just a box?  Digging further, I came across the second piece.  The Hebrew word for ark “tebah” appears only in two passages of the Old Testament.  First from the story of Noah and the second reference is to Moses’s vessel, a reed basket that his mother used when sending him down the Nile.  So, what does a basket have to do with an ark?  That’s a question translators have been trying to solve.

Translators recognized in context what “tebah” could mean “by proving what it couldn’t mean in the context.  It couldn’t mean a big boat if it also referred to a small basket. It couldn’t mean made of wood since Moses’ basket was made of reeds. It couldn’t mean something box-shaped or rectangular since baskets in Egypt of the day weren’t boxes; they were more round than rectangular” (Lovett).  What does this possibly mean?  “One of the best interpretations of the word “tebah” is actually life-preserver or life-saver….If the word is the equivalent of “life saver” then Gen 6:14 would read something like this; “Make for yourself a life saver out of gopher wood, coat it with pitch inside and out…” (Lovett).

After gathering my findings, I finally had to address the original question: Did they get at least the ark right?  My opinion is no.  Although they may have identified an accurate scale and some of the materials used, the directors missed the mark.  The ark is to have rooms inside the ark, not just open spaces with a few dividers,  pitch is to be placed both inside and out, and the ark is to have a covering which was removed “in the six hundredth and first year, in the first month on the first day of the month….Noah removed the covering of the ark.. (Genesis 6:14).

Even Ken Ham, CEO and founder of Answers in Genesis agrees.  “Ham told Newsmax he believes Christians will realize the blatant inaccuracies that Hollywood is portraying, saying the contrast between Noah as depicted in the film and the Noah of the Bible is quite alarming”(Newsmax).  Ham also stated, “that religious soul-searching could result from seeing the movie, but said that in the end, the film is a departure from the real account in the Bible and will likely do more harm than good” (Newsmax).

All in all, the film may be a smash hit on the artistic side, but Hollywood, you got it wrong again, and in the words of Ken Ham, “There is a book” that reveals the truth behind the inspired story.

is an author and editor for The Bottom Line Ministries as well as a member of Faith Writers. Currently she teaches high school language arts. She is a mom to four amazing blessings and enjoys every moment life has to offer. Renee has a fervor and drive to learn, she loves to read and spend time with her family, and is involved with her local church ministries. Humbled by God’s gift of words, she has a passion to write what the Holy Spirit has placed in her heart. She hopes to publish her in-progress book someday, but in the meantime, is honored to be placed as part of the TBL writing family and is holding on to the ride wherever God is leading. Renee and her family reside in their country home in Holland, Iowa.
Previous The Secrets of Jonathan Sperry–Movie Review
Next Just a Girl and Her Heart