Breaking News
Home / Entertainment / R-Rated Movies: The Truth Behind the Rating & An Exception for War Violence 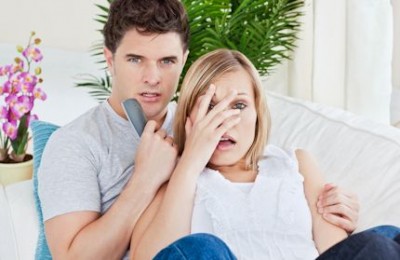 R-Rated Movies: The Truth Behind the Rating & An Exception for War Violence

After discovering the unexpected truth behind PG-13 movies, an article about R-rated movies seems almost unnecessary. In fact, I chose not to write about it initially, focusing instead on the dress that broke the Internet. But the topic resurfaced while at our Bible study group when I overhead one of the college students ask my husband (the leader) how he felt about R-rated movies that were rated for war violence.

He poses a valid question.

First, let’s look at how R-Rated movies are defined. According to the Classification and Rating Rules, an R-rated motion picture, in view of the Rating Board, contains adult material, which may include

adult themes, adult activity, hard language, intense or persistent violence, sexually-oriented nudity, drug abuse or other elements so that parents are counseled to take this rating very seriously. Children under 17 are not allowed to attend R-rated motion pictures unaccompanied by a parent or adult guardian. Parents are strongly urged to find out more about R-rated motion pictures in determining their suitability for their children. Generally, it is not appropriate for parents to bring their young children with them to R-rated motion pictures.”[1]

With such broad and lax rules, the MPAA has authority to push the limits. Viewers beware. There appears to be no limit to the number of profanities used in an R-rated movie. As soon as they surpass the number allowed in a PG-13 film, it’s a free for all. A prime example is 1995’s Casino in which the f-bomb was dropped 435 times—not to mention the slew of other profanities used.[2] And we already know that the amount of violence in PG-13 movies has skyrocketed, so be prepared for a lot more if you’re sitting down to an R-rated film.

Now let’s circle back to the original concern: are R-rated movies okay to see if they are rated primarily for war violence?

I’ve asked myself the same question. Over the weekend, my husband and I considered going to the movies, and one film stood out among the rest: American Sniper. I had heard rave reviews from friends and critics alike and was itching to see it. The previews were enticing—heart pounding, even.

I brushed off the rating initially, thinking, “Well, it’s about war. Of course it’s rated R.” And while that certainly has a lot to do with it, Plugged In, a movie review website from Focus on the Family, revealed far more. They rated it one-and-a-half stars for family friendliness and the content caution rating was the same for children, teens, and adults.[3] While the film pulls from the real-life story of Chris Kyle, America’s most lethal sniper, the movie contains approximately 100 f-words, 40 or so other profanities, and instances of the Lord’s name being used in vain.[4] There’s violence, of course, and while Plugged In says that the main character’s work is, for the most part, “accomplished quickly and ‘cleanly,’” his work has “its own share of horrors.”[5] The principal example being when he’s forced to take down a young child holding a grenade—and then his mother—in order to protect the American troops.

CBN reviewer Hannah Goodwyn praised the movie for portraying the personal cost of war and for not glossing over war’s brutality. However, she says, that in the end American Sniper should be approached with “extreme caution” giving it a four-out-of-five-star rating.[6]

“If we were able to see American Sniper through Chris’ own laser-sight eyes, we’d be able to easily reduce it down to its many positives: its heroism and sacrifice, and strong sense of duty and family.

But movies aren’t meant to be viewed through a scope. They require you to look at everything around you. So the story we’re given here is more complex than Chris would deem it, and more problematic. It’s filled with extreme, sometimes sadistic violence—presented to illustrate a point, but there nevertheless. And it’s crammed with colorful language (read: lots of f-words) that accurately reflects the way these men surely talked, but there nevertheless.

American Sniper is about more than one man’s heroism in the midst of war. It’s about the high cost of that war on those involved—and it asks (demands) that we too feel and see (if not quite experience) that cost.”[7]

Bottom line? The movie paints a realistic picture, leaves the audience speechless, and forces moviegoers to reflect on the true costs of war—and freedom. But, as Plugged In mentioned, the “sadistic violence” and profanities are there nevertheless.

So should we go see it?

American Sniper isn’t the first R-rated movie that accurately portrays war violence. Saving Private Ryan for instance came close to receiving an NC-17 rating for its violence, but likely avoided the rating due to the MPAA viewing the violence within context: war.[8]

So can we make an exception for R-rated war films? As adults, can we watch these R-rated movies because, in some way, the films are preserving history and reminding us of the cost of freedom? If we must protect our hearts with vigilance (Proverbs 4:23, Mark 7:20-23), then can we justify viewing such films?

Are they preserving truth or igniting violence?

is a freelance writer and contract copywriter who lives in the seacoast region of New Hampshire with her husband, Eric-Thomas,of five years. She currently serves alongside her mother as the Marketing Director for God’s Girls Christian Store and More, a online retail store serving the southern New England region. Her work has been featured in several print and online publications, and she is the recipient of two Faithwriters’ Editors Choice Awards for her short stories, which are scheduled for publication in the Mixed Blessings series. Her first book, Fragile: 30 Days of Hope for the Anxious Heart, is now available at samanthaarroyo.com. She can be reached at [email protected].
Previous Entertaining The Audience That Matters Most
Next When Was The Last Time You Spoke A Purposeful Blessing? Part 1