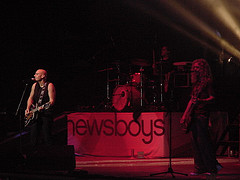 All of us will stand on the law of God or we will fall under the weight of it. George Perdikis has fallen. The bible tells us many will fall away from the faith in the “latter days.” He will not be the last.

In a guest post article on the site “Friendly Atheist” and posted in part by the faith site “patheos”, George Perdikis tells his story of how he became an Atheist. He co-founded the group “Newsboys”, but has not been part of the group since 1990. All of us live under the heavy weight of God’s law. It is a weight impossible for us to carry alone. All are subject to it. All have broken it. Will our belief in who Christ is give us the power to stand free from the law or will the weight of it crush us. Without realizing it I’m sure, hasn’t Mr. Perdikis just told us how the weight of God’s law crushed him?

I cannot know Mr. Perdikis’ heart. I can, though, try to righteously judge what he has said. What he said gives us some idea where his heart is. He said:

“As fundamentalist Christians, the only acceptable form of music was the kind that worshipped God. Bill and Rosalie were like second parents to me and, for that reason, I never questioned their advice“.

“I always felt uncomfortable with the strict rules imposed by Christianity. All I wanted to do was create and play rock and roll… and yet most of the attention I received was focused on how well I maintained the impossible standards of religion. I wanted my life to be measured by my music, not by my ability to resist temptation”.

“As I carved out a life for myself away from the church, I began my own voyage of inquiry into what I believed”.

Mr. Perdikis is not alone in his struggle with living under the law of God. We all have been right there with him. It shines God’s penetrating light on our sin. By his own statement, it seems his motivation for entering Christian music was driven by passions other than Christ: to please those he loved and to play rock ‘n roll. Living and playing music in a Christian world, Mr. Perdikis did not see his life measured by Christ. He wanted it measured by his ability to play music. Wanting worldly attention instead; his heart was self-seeking instead of Christ-pleasing. We all struggle with the desires of the heart; a way that seems right. Christian music is not free from this tendency either. In that much, he is correct.

After leaving the “Newsboys” in 1990, Mr. Perdikis then also left the Church to make his own life and decide what he believed and says he found it in Science and Cosmology. Far too many people are leaving dissatisfied with today’s Church. I don’t wish to indict Mr. Perdikis. His article just brought much needed attention to two great issues in Christianity; the total depravity of man and why so many are leaving the Church. Shouldn’t we pay good attention to what he has said? Sin is man’s problem and how the Body of Christ addresses sin is all important. We will stand or fall on the power of God. Clearly Mr. Perdikis, like many who would profess Christ, had not this power.

The Church, Christian Music, and in all forms of our Christian expression; are we too much like the world? Perfection we cannot achieve, but perfection is our standard. I’m sure Mr. Perdikis lacks understanding in this. It is only by grace that we can stand. Don’t we need to examine ourselves; though? Like the days of Noah, many are falling away from the faith. Shouldn’t we be asking why?

Part two of this article on George Perdikis will be posted on Wednesday 01/28/15. Mr. Perdikis plans to expose the Christian Music Industry. What does he say about Christianity and how should Christians respond?

I am a layperson with 35 yrs. of teaching Sunday School, bible studies, and preaching on occasion. I teach a bible study in a local prison. I am a 36 yr. counselor/social worker. I am disabled and have devoted the past four years to studying, praying, and writing about my greatest love; this gospel of Jesus Christ that has the power to save a man's soul. I also write devotions for a Church in Marion, VA and I write for an orphanage/ministry in Zambia, Africa.
Previous Sex and other spiritual unions: understanding soul ties
Next The Hero Who Saves The Day