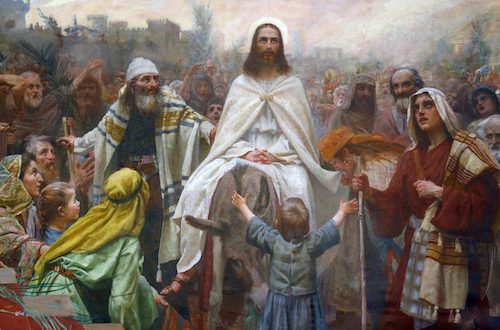 Walking Through Holy Week with Christ

From one extreme to the other. From lifted up to beaten down. From “Hosanna in the highest” to “Crucify him, crucify him.” These are the highs and lows, the ups and downs, that we witness as we walk through this Holy Week with Christ.

It began with Palm Sunday and his triumphal entry into Jerusalem riding on a donkey. He was hailed as the King, the Messiah. In these actions, He embodied the fulfillment of the prophecy and promise of Zechariah 9:9, which says:

“Rejoice greatly, O daughter of Zion! Shout aloud, O daughter of Jerusalem! Behold, your king is coming to you, righteous and having salvation is he, humble and mounted on a donkey, on a colt, the foal of a donkey.”

Churches commemorate Palm Sunday by passing out long palm leaves or sometimes even leaves crafted into the shape of a cross. Some congregations may wave the leaves from side to side, mimicking what must have taken place all those years ago.

And the week continues with many notable steps along the “walk” to the cross, such as the cursing of the fig tree (Mark 11:12-14), the clearing of the temple of the moneychangers (Mark 11:15-17), the challenging of Jesus’s authority by His disciples (Mark 11:27-33), the washing of His disciple’s feet (John 13:1-12), and the sharing of the Last Supper (Mark 14:12-26). We know, too, that during this time, Jesus poured his heart out to his father in agony at the Garden of Gethsemane. Yet He said “not my will but Thy will be done.”

And then there’s Good Friday, the day that Jesus took those last lonely steps toward the cross. Yes, there were crowds there, but it definitely was not the same crowd he had experienced before. How very alone he must have felt. But yet, he carried on for our sakes.

For the people who were living during those dark days when Jesus died and was laid in the tomb, it must have felt like it was the end. The end of all their hope in the man they knew as teacher, friend, miracle worker–as Jesus. I can only imagine the devastation, the bewilderment, and the disillusionment they must have felt.

But aren’t we so very glad to know that the story didn’t end there! We know about the victory He had over the cross. And so as we walk steadily with our Lord during this most holy time as He approaches the cross, we wait with anticipation for the coming blessed and victorious Easter (or Resurrection) Sunday.

Carry with you in your spirit this week this song from Michael W. Smith, “He Will Never End.” This song reminds us that His love broke “the curse” and that “it was never over” because He rose again. It tells us emphatically through the music and lyrics that death is destroyed, and that He is alive! That is good news!

The video for this song was filmed on location in Israel. May this song bless you and keep you throughout this Holy Week and on to the glorious resurrection of our Lord and Savior, Jesus Christ on Easter Sunday. He loves us and because of that wonderful love, we are victorious, as He is. He will never, ever end! Amen!

Sharon S. Johnson loves the Lord and thanks Him for the gift of her family, especially her two wonderful daughters Havyn and Nia. She is a lifelong musician, an author, and a lover of all things creative! She is the author of “God Must Have Wanted Me to Smile," the award-winning inspirational story that launched her writing career (featured in Tales2Inspire: The Sapphire Collection). Through God’s amazing grace, Sharon has now released her very first book, Verses of Victory: a 31-day devotional to educate, motivate and stimulate those who seek victory. Sharon is presently a writer for two digital Christian magazines: Faith Filled Family Magazine, for which she writes music reviews, feature articles and interviews; and The Bottom Line, for which she writes articles and social media posts. She has written devotionals for Journey magazine (LifeWay), and has now started her own blog, This is His Song. Sharon wishes to acknowledge and thank God, her family, and her friends for their unfailing support during her journey toward these awesome achievements.
@thisishissong
Previous Sooner Than You Think!
Next If He Is Risen…Why Are You Dead?