Breaking News
Home / Faith / Are You Paying Attention To The Holy Spirit’s Nudge? 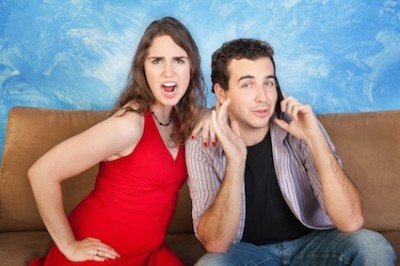 Are You Paying Attention To The Holy Spirit’s Nudge?

The “Kiss Cam” is a fun activity often used at sports events.  The camera scans the audience and picks a couple.  When they notice themselves on the big screen, they are supposed to kiss.  It gives them the thrill of seeing themselves on camera and the audience something to focus on during a lull in the action or at half time. A while back, at a Celtics game, the crowd got a surprise.

In this particular instance, the girl noticed that she and her significant other were showcased for a moment within the typical, heart-shaped border.  She turned to let him know, even bumping him with her arm to get his attention.  Engrossed in his cell phone call, he brushed her off.  The camera scanned to the next couple after exposing this man’s main concern to the whole audience.  It garnered some chuckles.

After two or three other featured love-birds exhibited a quick embrace, the cameraman scanned back to the couple with the cell phone.  Again, the girl noticed and tried, somewhat less enthusiastically, to get the attention of her significant other–to no avail. The guy kept talking while giving her a stern look and brushing her off again–more emphatically this time.  By now, the camera man spotted a challenge.  After a couple more “kissing couples” were featured, he panned back to the “cell phone man”.  Again, the woman saw their faces on the big screen.  Again, she tried to get his attention, speaking to him and shaking his arm.  He turned toward her venting his obvious frustration over the disruption.  At this point, the Celtics mascot entered the picture.  He strode over to the obliviously insensitive guy, bopped him on the head, poured someone’s drink on him, then picked up the man’s lady carrying her to the aisle and up the stairs.  As the mascot looked back, the audience cheered wildly.  The “cell phone man” stood bewildered and aggravated then slowly headed toward the aisle.  He got a very unexpected, but fitting, consequence.

I couldn’t help but think of the similar way we humans sometimes treat God.  Some of us are paying attention while others are all wrapped up in their own personal “idols”-if I might take the liberty to use that terminology. (Mark 4:18-19)

God tries to get our attention and we brush off His effort.  He may use another person to try to turn our eyes onto something special He is doing for us or onto something fun He wants to introduce us to; but, our response is disinterest and frustration at His interference. (Matthew 25:6-13)  Finally, God carries off those who have been mindful of His presence and His touches and leaves the disinterested ones to continue to focus on their idols.  They get left behind.  “Left behind” wasn’t God’s first choice for the man, but He honored the choice of the one He sought.

Are you mindful of God’s efforts to turn your eyes and heart upon Him?  Have you blown off His attempts to get your attention while focusing on your “idols“?  What might one of those idols look like?  Now is the time to heed His call.  (Deuteronomy 11:16)

I just love walking outdoors - day or night. I identify most with the creative side of God and am energized by His artistry all around this world. He amazes me every time I turn around! Yeah, God and thank you, Jesus.
Previous Afraid to Let Go
Next Pushing Through Spiritual Resistance