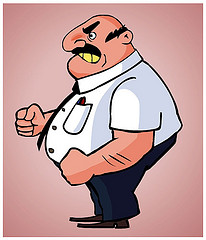 The title above may sound like a television series or a rap song, but it’s referring to neither. It’s meant to be taken literally. It is what it is; bad bosses… are an unpleasant fact. They are like annoying little flies that you want to desperately smack, but if you do then you have the mess to clean up afterwards. They are the ones who pile on extra work at the same pay rate, who nit-pick at every detail, and who poke holes in your finest productions. Bad bosses always seek the moment to abuse their power and authority. Belittling is there aim. They take pride in making you feel unimportant or like you’re not a valuable asset.

Pharaoh, king of Egypt, was the epitome of bad bosses—the “Kingpin” if I may. He was in charge of the entire Israelite nation which meant both the Egyptians and the Israelites reported to him. He knew no one would dare defy his orders, and he proudly took advantage of this. He made the Israelites suffered in misery day and night. They were overworked and under appreciated. Added to their displeasure was the constant whipping they received.

Today’s bad bosses seem to be catching up with Pharaoh as they lead from a place of disrespect. Hurling sarcastic insults and making unfair demands is the norm. These immoral employers use their employees as scapegoats upon whom they unleash all their pent-up anger. They fail to realize that we were all created equal in God’s image (Genesis 1:27). Malachi 2:10 says, “Have we not all one Father? Hath not one God created us?” Galatians 6:3 also reminds us, “If anyone thinks he is something when he is nothing, he deceives himself.” Status or position does not give anyone the right to mistreat another.

Pharaoh’s pride overshadowed his good judgment when the Lord demanded that he let his people go, and that caused him his life. It can be tempting to wish bad for bad bosses or get in an altercation with them, but its best to lead by example. As children of God, we are following Jesus’ example, so we cannot treat them as their actions deserve. Proverbs 15:1 says, “A soft answer turns away wrath, but a harsh word stirs up anger.”

Never forget that death and life are in the power of the tongue (Proverbs 18:21). As a result, carefully guard your responses when dealing with bad bosses. God knows you’re in an unhappy situation. He knows you have done all you can to tolerate the work place, and he is working tirelessly to rescue you. So trust him to either help you cope or to remove you from that toxic environment. After all, he did lead the Israelites out of Egypt and from under the ruling of Pharaoh.

Amelia Brown is from the beautiful island of Jamaica. She is a 28 year old Guidance Counselor by profession, but a passionate writer at heart. Most of her articles written are aimed at stimulating positive change under the guidance of the Holy Spirit. She is also a published poet and a member of Faithwriters. Outside of writing, she enjoys volunteering, cooking, and turning frowns right side up. Amelia currently lives in New York.
@ameliambrown
Previous Which Party does God Support?
Next Mercy Outruns Malice