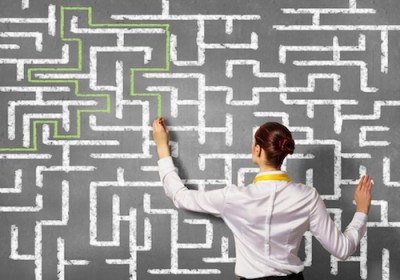 Beyond the Box: Biblically-Based Brainstorming Tips

“Okay, Mr. Bright Idea!” If you’ve ever heard that phrase before, it’s likely that, with a hint of sarcasm and a roll of their eyes, others are expressing that your ideas are over the top. But it doesn’t matter to you because you pride yourself in being ahead of the game, in leading the pack rather than following. That’s just a part of who you are. It’s what you do best. Sound familiar? If so, then you may be what is commonly known as an outside-the-box thinker.

Although a bit cliché, and perhaps even outdated according to some, the phrase “think outside the box” is an instruction that is commonly given to those who are trying to solve a problem in order to get their creative juices flowing. It is a metaphor that means to think differently or unconventionally.

As an outside-the-box thinker, you likely feel most at ease in a brainstorming session in which you are told that all ideas are fair game. During the brainstorming process, you are invited to just throw your ideas out no matter how big or small, no matter how outrageous or miniscule. In such a structure, it seems that regardless of what others may think, it is possible that in expressing your bright ideas, you at least get others to expand their horizons long enough to see past their own mental blocks. Even if your idea is not used, you perhaps were able to elevate the conversation to a level that says to others that it is okay to get “outside their boxes.” After all, if you can say your “way out there” idea, they feel a little safer to say some of their own. Good job. You’re feeling useful again!

Well, it dawned on me that whenever I try to solve my problems on my own, I am not allowing God to be who He is. I am limiting Him to the box of my own little mind.

Although my mind was created by Him and is quite fabulous, it cannot compare with His wisdom and His creativity. Even a team of the best outside-the-box thinkers can in no way match what He has to offer.

Say no more! I want God on my team. Yes, I can use His help in the problems I might have to solve in the workplace, but more especially in the everyday problems I need to resolve in my own life. I want to give Him the opportunity to share His bright ideas (and I don’t mean that sarcastically).

I want to brainstorm with Him. But I know, too, that His ways are not my ways. So I need to think about what that really means. Is it like in the world, where brainstorming is throwing everything out there on the table? Or is it something that is vastly different that involves more of Him and less of me?

Study the stories in the Bible of people with problems, and you’ll perhaps see some similarities emerge from those who sought God as their problem solver. Think about the woman with the issue of blood, the man at the pool of Bethesda, or maybe even Jonah in the belly of the fish. They seem to have had great results by partnering with the Lord in the midst of their problems so perhaps their process deserves a closer look.

Here are a few things I observe:

1. Admit there is a problem and identify it. (I’ve got that one covered because likely I have complained about the problem all the way to my problem solving session with God. Sad, but true. This area needs some work!)

Even Jesus seems to have gone through these steps in the Garden of Gethsemane (Matthew 26:36-46, Luke 22:39-46). He was going through a struggle knowing that He would soon face death. That internal struggle could definitely be considered problematic, especially since Jesus knew all along that dying for mankind is what He was sent here to do. But, how did He handle this struggle?

Jesus acknowledged the Father, asked for His help, but ultimately surrendered to the Father’s will. He got up from prayer, knowing what steps He must follow, and though He died, He arose victorious, proving once and for all that God is the ultimate Problem Solver!

You see, no problem is too big or detail too small for God to handle. His thoughts for solving our problems are so much higher than ours because He has the whole world in His view. Even though it may sometimes seem like things aren’t working out, He knows the end from the beginning, and so whatever solution He comes up with is the best. He is so creative that His solution is likely something that is beyond what you ever could have thought of on your own, often even beyond your wildest dreams. (Ephesians 3:20)

Yes, God is the Ultimate Creator of bright ideas–among other things, that is just one part of who He is. So allow Him to do what He does best—go past just thinking outside the box into His infinite source of wisdom and power to handle your problem.

Romans 11:33 says, “Oh the depth of the riches of the wisdom and knowledge of God! How unsearchable his judgments, and his paths beyond tracing out.”

Now, that’s definitely a testament to just how much brainstorming God’s way is way beyond the box! When have you allowed God to direct your problem solving? What was the outcome?

Sharon S. Johnson loves the Lord and thanks Him for the gift of her family, especially her two wonderful daughters Havyn and Nia. She is a lifelong musician, an author, and a lover of all things creative! She is the author of “God Must Have Wanted Me to Smile," the award-winning inspirational story that launched her writing career (featured in Tales2Inspire: The Sapphire Collection). Through God’s amazing grace, Sharon has now released her very first book, Verses of Victory: a 31-day devotional to educate, motivate and stimulate those who seek victory. Sharon is presently a writer for two digital Christian magazines: Faith Filled Family Magazine, for which she writes music reviews, feature articles and interviews; and The Bottom Line, for which she writes articles and social media posts. She has written devotionals for Journey magazine (LifeWay), and has now started her own blog, This is His Song. Sharon wishes to acknowledge and thank God, her family, and her friends for their unfailing support during her journey toward these awesome achievements.
@thisishissong
Previous The Incredible Faith of Persecuted Nigerian Christian Danjuma Shakara
Next Rescued Jewish Boy Repays Kindness 77 Years Later