Breaking News
Home / Faith / Christians, Has War Been Declared Against Us? 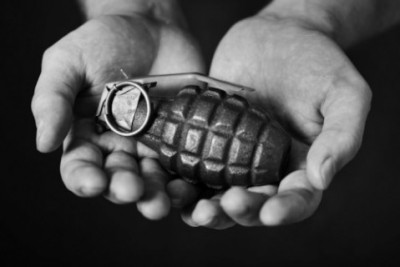 Christians, Has War Been Declared Against Us?

Friends, I am a citizen of the United States of America and I love my country. However, much has changed in recent years and the very things our forefathers tried their best to prevent are coming to pass. You see, our country was built on a Judeo-Christian foundation, with a special emphasis given on upholding God’s Word, which includes showing reverence for our Creator.

Now let it be said, I do not hate the LGBT community and its supporters, but I also do not condone their actions. I believe all humans have worth and were made in the image of the Creator (Gen 1:27). However, lines need to be drawn between self-worth and sin. Furthermore, when someone stands against sin, they should not be ridiculed, mocked, and told their beliefs don’t count.

Over the past few days, many unjust actions have taken place against Christians in response to the 5-4 majority decision in the Supreme Count that declared gay marriage is to be recognized in all 50 states. Is this the beginning of a domestic war that is only going to get worse? I hope not, but it’s very much looking that way.

A Look at President Obama

After the Supreme Court ruling, in his speech addressing his feelings on same-sex marriage, Obama made it clear that he expected Christians, and other opponents of gay marriage, to reconsider their faith in exchange for a pro-homosexual point of view. One day later, he delivered a eulogy at the funeral of Clementa Pickney, who was a victim of the Charleston shooting. The very first words that came out of his mouth were, “Giving you all praise and honor to God.” Afterwards, he went on to talk about faith and the Holy Bible, with a special emphasis on faith as mentioned in Hebrews 11:1.

(A Message to Obama)

Hebrews 11:7 By faith Noah, being warned of God of things not seen as yet, moved with fear, prepared an ark to the saving of his house; by the which he condemned the world, and became heir of the righteousness which is by faith.

It doesn’t matter how many times you sing “Amazing Grace” if you don’t believe the very thing you’re singing about. In closing, please take a look at the second stanza of this song:

T’was Grace that taught…
my heart to fear.
And Grace, my fears relieved.
How precious did that Grace appear…
the hour I first believed.

Criticism of Christian Freedom of Speech

Not only is there a breakdown in our “leadership”, but the LGBT community and it’s supporters are trying to defend their beliefs by attempting to silence Christians. This includes the Supreme Court refusing to hear cases that demand Christians not be forced to honor homosexual requests because it violates their faith in God. In addition, the secular media has tried to silence Christians, and when this doesn’t happen we become ridiculed.

One such instance happened Saturday night after a UFC bout in which Yoel “Soldier of God” Romero defeated Lyoto “The Dragon” Machida. After knocking out Machida, Romero addressed the people of the United States in his victory speech, declaring that we should remember Jesus.

Attacks on Romero has been coming from all over the secular media. Why is this so? Is his freedom of speech not important? How about your freedom of speech? Do you see the moral decline that is happening?

The LGBT Community is Attempting War on Us

The agenda of the LGBT community has become very apparent. They are trying to destroy the Christian faith because it challenges their sin. But you don’t have to take my word for it. Let’s let one of their faithful speak on their behalf.

Please watch this video. This cat even smiles, at around the 1 minute mark, when he mentions a Christian being persecuted and tortured for his faith. However, he goes into more detail than that about how he expects the United States to respond to Christians.

How Should We Respond?

We need to respond with both truth and love. Remember, to put, and keep on, the full armor of God (Eph 6:11). This isn’t just a war that had been declared against Christians by man, but it is a war in the heavens as well. Remember, our weapons or warfare are mighty and able to take down enemy strongholds (2 Cor 10:4). Finally, remember that the battle belongs to the Lord, and therefore it cannot be lost. Remember, sometimes it’s necessary to be still so that the Lord can do His perfect work (2 Chron 20:17).

Soldiers of God, this is a call to attention. We need to realize that the very things we hold dear to us will come under attack if we don’t approach this situation with great wisdom. Sometimes God calls us to get physical (Psa 144:1), but I don’t believe this is a time for that. It is however, a time to press into the spiritual and fight this battle with truth and love. Let God guide your hearts my friends. Thank you for reading and God bless.

Joel M. Bauer is a 45-year-old U.S. Army Veteran from Dunn, NC, which is just outside of Raleigh. After being honorably discharged from the U.S. Army, he attended school at Taylor University, a Christian liberal arts school, in Fort Wayne, IN, where he received his BS in social work and psychology. He has worked in such places as a homeless shelter, a community based treatment center for severe mental illnesses, a school for troubled students, and other social service agencies. His current endeavor is to build The Bottom Line website into a site that inspires both Christians and non-Christians alike, and brings glory to God.
Previous God’s Love is Better Than Hollywood
Next Highlights of Last Night’s BET Awards