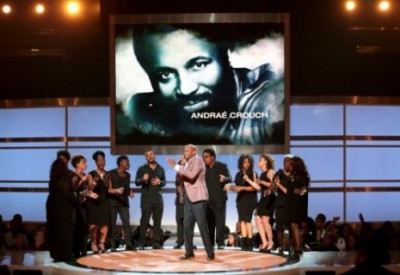 BET is a television network known for celebrating African Americans and their many accomplishments. The acronym stands for “Black Entertainment Television.” Last night BET hosted its 15th anniversary Awards Show. Here are a few noteworthy highlights from the evening:

Illuminati Showing Out
Throughout some of the performances last night, the Illuminati signs and symbols took center stage. Red and black triangles were visibly arrayed in the background while artists performed. One artist, dressed in full black, even sported his dreads in three sections forming a triangle. (Exodus 20:4-6)

Bad Boy Records reunion
P Diddy, previously called Puff Daddy, reunited all the big-hits artists from Bad Boy Records on last night’s Awards Show. His record label has been around for twenty years. Artists such as Faith Evans, Lil Kim, Mase, and 112, all collaborated to give a grand performance. They even looked the part by dressing retro-style; donning sweat suits and baggy pants. In the secular world, that was a grand reunion. However, the grandest will be the return of Jesus and His reunion with the chosen few. (Revelation 1:17, Mark 13:26)

Empire Cast Performance
Predictably, Jussie Smollett, who played a homosexual in the TV series Empire, gave a speech about freedom and equality in America, in support of the Supreme Court’s decision to make same-sex marriage legal in all States. His speech came in the middle of him singing the song, You’re So Beautiful, He then modified some of the words which then sang “This the kind a song that makes a man love a man.” Some stood in support while others sat in disgust. (Romans 1:27)

Nicki Minaj’s Acceptance Speech
Nicki won the Viewers’ Choice Awards, and then she forgot what she was getting awarded for. She said, and I quote, “What was this award for? I’m sorry!” In her defense, she explained that she was backstage. Was she confused from having finished a performance, then being called right back on stage? Was it a stunt? Or did she just honestly forget why she was being awarded? Who knows? As if to add assault to injury, she then gave a rather isolated speech about waking up to unaccomplished dreams and blaming yourself for it. (James 1:5)

Smokey Robinson’s Speech
Mr. Robinson gave a lengthy speech centered on being humble, before he performed two of his songs. Throughout his speech, he frequently recognized and thanked God for His many blessings. He made it clear that his success isn’t from his own might, but by the grace of God. He reminded the other artists that the music industry was there before they came and it will be there after they’re gone, so they should stop acting like it’s all about them. That’s a message we can all pay attention to. Let us humble ourselves. (Proverbs 16:18)

Donnie McClurkin’s Performance
Legendary gospel artist, Donnie McClurkin, brought Jesus Christ center-stage when he sang of His saving blood. As a tribute to Andraé Crouch, Donnie performed “The Blood Will Never Lose its Power.” Undoubtedly, the Holy Spirit was ushered into the arena. During his performance people stood to their feet and worshiped God. (Matthew 18:20)

What was your favorite moment of the BET Awards from last night?

Amelia Brown is from the beautiful island of Jamaica. She is a 28 year old Guidance Counselor by profession, but a passionate writer at heart. Most of her articles written are aimed at stimulating positive change under the guidance of the Holy Spirit. She is also a published poet and a member of Faithwriters. Outside of writing, she enjoys volunteering, cooking, and turning frowns right side up. Amelia currently lives in New York.
@ameliambrown
Previous Christians, Has War Been Declared Against Us?
Next The Way Forward: Clear Vision for the Road Ahead