Breaking News
Home / Faith / Do You Have a “Whatever” Attitude? 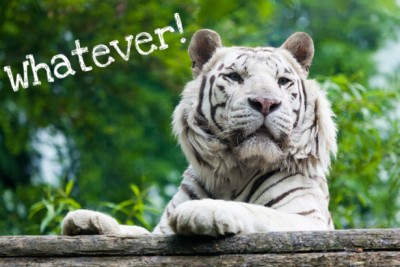 Do You Have a “Whatever” Attitude?

Doesn’t that word just infuriate you? It does me because it’s typically used alongside an I-don’t-care attitude and/or the rolling of the eyes.

Grrrr! It’s enough to make my red hair stand on end even though I know I’m often guilty of having a “whatever attitude” myself. After all, it’s easy. It requires no effort or concentration to say, “Whatever.” And so many times, we use the word to express an attitude that would ordinarily get us into trouble, but because we can excuse the word’s meaning, the attitude is left unchallenged. I can’t tell you how many times I’ve heard kids use it with their parents. In fact, it’s become trendy and cool. If you don’t care, don’t want to care or want to show disrespect without being too direct, just say, “Whatever!”

A bit of a difference, isn’t it? Paul’s “whatever attitude” is a reminder of what our attitudes should be. Instead of speaking the word in frustration, we should say “whatever” in faith, as in, “Whatever happens, I’m going to trust and praise God.”

We use the word as a signal of defeat, but Paul’s use demonstrated victory. Same word. Totally different applications and attitudes. Today we must make a choice of how we’re going to live our lives. Strangely, the answer will be the same either way–whatever. But which “whatever” will it be?

Dana is a full-time Christian author and speaker residing in Greenville, SC with her husband and two dogs. In fulfilling her call to evangelize the lost and edify the saints, Dana spends her days writing devotions, devotional books and books for children, as well as recording podcasts on various Biblical topics. She serves in many capacities at her local church, including the roles of church pianist and ladies' Sunday School teacher. Dana has a passion for souls and longs to be used of God in whatever way He deems necessary. When not writing or serving at church, Dana can most likely be found reading or hiking a nearby trail.
Previous Andy Mackie: Defying Death And Sharing The Gift of Music
Next What to Expect In Your First Year of Recovery