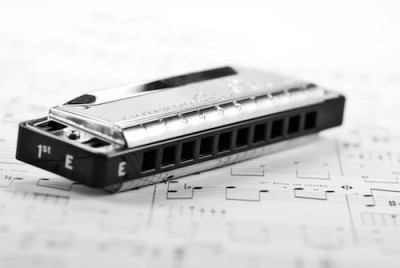 Andy Mackie: Defying Death And Sharing The Gift of Music

By all rights, Scottish born Andy Mackie should have technically and medically died a long time ago; but instead he used his last years to “pay it forward” to a multitude of school kids.  He gave his reason for the extended life opportunities as being tied to giving away the gift of music.

A red letter marked that day when Andy called it quits on the 15 different heart medications prescribed after nine heart surgeries.  He decided the misery he was suffering from their side effects was no longer worth it.  Not knowing how long he had left, he determined to spend the rest of those days doing something he always wanted to do–teach children to play the harmonica.  In his first month free of the medications, using the $600 he would have paid for the pills, he traveled to schools around his area giving away 300 harmonicas with lessons included.  Realizing he was still able, and finding himself alive a second month, he gave away hundreds more harmonicas with lessons.

Eleven years and 16,000 harmonicas later, Andy was still giving away the gift of music.  He told the kids “If you give it away, you get to keep it forever”.  Andy surmised  that even Bill Gates couldn’t feel richer inside than Andy himself did.

To help keep the kids interested in music, Andy used a majority of his Social Security money to buy the supplies for “strum sticks” (simple instruments with strings attached) which he constructed himself.   He kept the kids in free lessons by encouraging the older kids to teach the younger.  He also founded the Andy Mackie Music Foundation.

With a $5,000 donation from a listener hearing the broadcast of Andy’s original story, Andy hired someone part-time to teach the school kids how to make the strum sticks so that when his time on this earth ended, the music would go on.

After multiple, additional heart attacks, a tenth heart surgery, then another heart attack and stroke, Andy passed away on November 5, 2011.  He left a legacy of love, music, and generosity throughout his last years.  At just  72, he managed to give away 20,000 harmonicas and 5,500 strum sticks.

“One notable accomplishment,” reported by JP Allen, “was in 2005 at the Seattle Folklife Festival, [Andy] led the simultaneous playing of ‘Twinkle Twinkle Little Star’ with 1,706 harmonica players to set a Guinness World Record.”

What legacy will you be leaving to the world and those you love? (Use Luke 6:38 for inspiration.)  What excuse or fear do you need to put aside and “just do it?

I just love walking outdoors - day or night. I identify most with the creative side of God and am energized by His artistry all around this world. He amazes me every time I turn around! Yeah, God and thank you, Jesus.
Previous “The Mapmaker’s Children” Entertainment and Modern Relevance In History
Next Do You Have a “Whatever” Attitude?