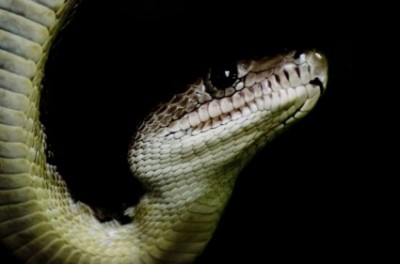 Don’t Get Too Close

Recently, a friend of mine, knowing that my husband and I are avid hikers, sent me a message detailing the specifics of how to distinguish between a poisonous and non-poisonous snake. One way was to examine the shape of the snake’s eyes. Round eyes identify the snake as non-poisonous while elliptical eyes identify it as poisonous. Another way to distinguish between the two was to examine the snake’s tongue. A forked tongue generally tells us that the snake is to be avoided.

With all due respect to my friend, I have my own snake identification plan. It goes like this: “Snakes are bad. Stay away!”

Seriously, like I’m ever going to get close enough to a snake to inspect its eyes or tongue. No, thank you! Likewise, there’s no way I could ever get my dogs to understand the difference, so I’ve trained them that if the creature in question wriggles and slithers on the ground, they need to stay back. Warn us of the danger, please, but don’t get too close. Whether the beast is poisonous or not, I’d rather we all just steer clear. It’s safer that way.

Now, if only we could adopt that same attitude when it comes to sin. What is it about wrongdoing that is so appealing and alluring? We know it’s dangerous. We know that if we play with fire, we will eventually get burned. Yet, we find ourselves getting closer and closer. Just a taste, right? Funny, that’s exactly what Eve said right before she bit into the forbidden fruit. Haven’t we learned from that example alone that sin never stops at “one bite”? It would seem not.

The apostle Paul evidently fought the very same battle. He knew the difference between right and wrong. There was no doubt in his mind about the poisonous grip of sin. Yet, he still struggled with its enticements. Take a look: For I know that in me (that is, in my flesh,) dwelleth no good thing: for to will is present with me; but how to perform that which is good I find not. For the good that I would I do not: but the evil which I would not, that I do. Now if I do that I would not, it is no more I that do it, but sin that dwelleth in me (Romans 7:18-20).

Sound familiar? I do the things I don’t want to do and fail to do the things I want to. I don’t mean to flirt with sin. I don’t intend to fall into its grasp. Yet, I do because I fail to heed my own advice: Don’t get too close.

Let’s face it, there are certain places or people that bring out the worst in us. We know this, so in order to put an end to our sin, we need to avoid those places and those people. We need to get out of the way so when sin lashes out, it finds nothing to grab ahold of. We must identify our weak areas and make every effort to conquer those areas by whatever means necessary. No, it won’t be easy, but the alternative is simply unacceptable.

Identifying harmful snakes is a chore I’d rather not take on. Fortunately, identifying harmful sin is pretty easy. All sin is poisonous to our souls. It should be avoided at all costs. No matter how good it feels or how pleasant it may seem at the time, I urge you to keep your distance. It never pays to get too close to sin.

Are you struggling with a particular area of sin today? Is there some way we can help you in your battle?

abstaining from sin Adam and Eve advice all wrong doing is sin Apostle Paul avoiding sin Battle do want to do don't get to close to sin don't get too close don't want to do don't want to sin evil flee Flesh forbidden fruit garden in my flesh just a taste just one bite Poison Romans 7:18-20 saying no to sin sin is poisonous soul staying away from sin struggle struggle with sin struggling with sin 2015-04-08
Dana Rongione

Tags abstaining from sin Adam and Eve advice all wrong doing is sin Apostle Paul avoiding sin Battle do want to do don't get to close to sin don't get too close don't want to do don't want to sin evil flee Flesh forbidden fruit garden in my flesh just a taste just one bite Poison Romans 7:18-20 saying no to sin sin is poisonous soul staying away from sin struggle struggle with sin struggling with sin

Dana is a full-time Christian author and speaker residing in Greenville, SC with her husband and two dogs. In fulfilling her call to evangelize the lost and edify the saints, Dana spends her days writing devotions, devotional books and books for children, as well as recording podcasts on various Biblical topics. She serves in many capacities at her local church, including the roles of church pianist and ladies' Sunday School teacher. Dana has a passion for souls and longs to be used of God in whatever way He deems necessary. When not writing or serving at church, Dana can most likely be found reading or hiking a nearby trail.
Previous Who is the Alpha Male?
Next I Don’t Want To Be An Orphan Any Longer