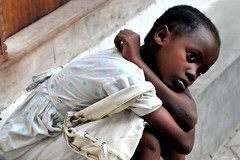 God Who Sees Me

As far as I can tell, Hagar is the first woman in scripture that an ‘angel of the LORD’ speaks to “I will surely multiply your offspring so that they cannot be numbered  for multitude” (Gen 16:10 ESV). If you recall the story, God previously gave Abraham a similar blessing, in that he would become a great nation. While Abraham and Sarah traveled to the designated (promised) land; famine struck, and they went down to Egypt. While there, Sarah secured a slave-girl named Hagar. When Sarah didn’t conceive, she asked Abraham to obtain a child for them…through her handmaiden Hagar. Here, we see Sarah and Abraham running ahead of God’s timing and Hagar became the victim of their scheme. Actually, Sarah’s folly had its root in unbelief, therefore, strife between the two women quickly followed.

After Hagar conceived a child, the two women could scarcely dwell together, causing Hagar’s flight to desert territory. The appearance of an angelic messenger from God was sweet relief to the poor, pregnant fugitive “The angel of the Lord said to her, “Return to your mistress and submit to her” (Gen 16:9). Obediently, Hagar returned to her masters and bore a son for them. They named him Ishmael, which means God hears (Gen 16:11). Years later, rivalry and strife in the home became worse. This time, Hagar and son were permanently cast away. Once again, Hagar traveled during impossible conditions. Together with hot, arid weather and isolation the weary sojourners could not survive. Soon, food and water supplies ran out. Resigning herself and her son’s life to death, God appeared. Suddenly, Hagar saw an oasis of water nearby. Both Hagar and Ishmael revived and she knew God had seen them. It was in this forsaken condition Hagar realized she was the object of God’s special care. You might say, her extremity became the Lord’s opportunity.

To our great benefit, His watchfulness doesn’t stop with Hagar and Ishmael. We experience heavenly protection quite frequently. Why, just this Thanksgiving, I saw miracles of blessings falling from above. Bet you did too. The all-seeing Father’s divine purpose continues in the life of everyone “A Father to the fatherless, a defender of widows, is God in His holy habitation. God sets the solitary [lonely] in families (Psalm 68:5 NKJV).