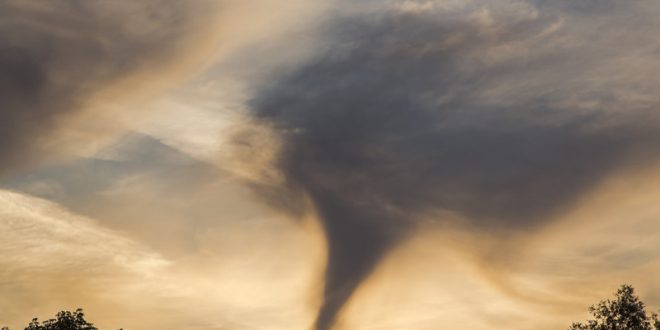 God’s Promises in the Storms of Life

The summer skies were blue and cloudless,  sending every neighborhood child outdoors to play. Some were down by the creek catching crawdads while a game of baseball had formed in the quiet street and  a backyard swimming pool was filling up  with laughing teenagers.  That July day was perfect. No one knew that a storm was coming …

It was around lunchtime when a neighbor called from his porch that a tornado was approaching. Several baseball players stopped to look up, seeing nothing but blue sky. Then,  someone pointed north— “there it is!” Everyone looked up to see a strange white cloud, shaped like an ice cream cone and reaching for the ground.  Children began to scatter in every direction, running for the safety of indoors as frightened  parents  yelled their names. Within minutes, a cold wind was blowing, painting the blue sky a dark gray.  The funnel-shaped cloud completed its rotation to the ground,  throwing dirt back up into the air. Rain began to fall, and soon pea-sized hail followed.

After 15 minutes of heavy rain and high winds, the storm began to subside and the twister left the ground as if the sky was pulling it back where it had come from. The storm  passed as quickly as it had come. The neighborhood and families ventured out to assess the damage.  No permanent damage had been done, and after a short time, the sun actually peaked through the parting clouds. The day ended as beautifully as it had begun.

This is the nature of storms. We do not always have warning that they are heading our way. The storms of life have the same nature … We are having a perfectly fine day, and then the skies turn dark and something blows in, causing us to run for shelter.   Some storms come in the form of relationship difficulties, some occur through health crisis, and others may be in the form of great financial struggle or the loss of a cherished home, even the death of one we love.

But God promises in His Word that we are not alone in the storms of our lives. He will be there in the midst  when we call to Him and  place our trust in Him–the One Who controls even the storms:

Then they cried out to the Lord in their trouble,
And He brought them out of their distresses.

He hushed the storm to a gentle whisper,
So that the waves of the sea were still.

Then they were glad because of the calm,
And He guided them to their desired haven (harbor).

Let them give thanks to the Lord for His lovingkindness,
And for His wonderful acts to the children of men! Psalm 107:28-31

Storms come to all of us, but we do not have to weather them alone. God is never taken by surprise, and he brings us safely through each storm we face: Are you feeling tossed about, out of control because of a storm you are facing?

What can you do today to turn towards God for guidance and safety?

My husband Dan and I have three children and three grandchildren. We live in central Illinois. I am a graduate of The Institute of Children's Literature, a member of faithwriters.com, and a member of SCBWI. My writings have been published at chirstiandevotions.us, in DevotionMagazine, the PrairieWind Newsletter, and here at thebottomline.co.
Previous A Virgin Birth; Are We Leaving Anything Out?
Next Orbiting The Earth Strengthened John Glenn’s Belief In God