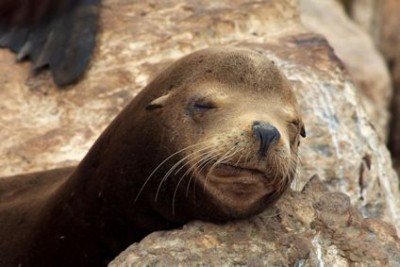 Two unusual things are happening in the Pacific Ocean. This body of water is much warmer than normal, and sea mammals are being found dead along the California coast. What is the explanation? Scientists aren’t sure what the cause is, but here are some facts:

* The ocean is 5 degrees warmer than normal.

* In the first three months of 2015 more than 1,800 dead sea mammals were discovered from San Diego to San Francisco. On July 6, a dolphin, sea lion pup, and an adult elephant seal washed ashore on a San Francisco area beach.

* Ever since the tsunami and Fukushima disaster in 2011, nuclear contamination has been poisoning the Pacific Ocean and moving closer to North America. A massive amount of radioactive material is expected to reach the continent in 2017.

* Sea life has been dying at an unusually high rate for three out of the last five years.

Scientists are somewhat confident that the cause of all this sea life dying is due to a food shortage brought on by the high temperature of the water. However, they are not sure what the cause is of the 5 degree increase. There is no conclusive evidence that it is linked to Fukushima. What caught my attention is that the headline of the article I researched used the phrase, “one third of the earth.”

The Pacific Ocean covers about one-third of the earth’s surface. This is interesting in reference to the Book of Revelation, where the phrase “one-third” is used 15 times. See Revelation 8:7-12, 9:18, and 12:4. A connection is made to the whole earth, trees, grass, the sea, creatures in the sea, ships, rivers, the sun, moon, stars, day and night, and mankind(emphasis mine). In all of these cases the cause is destruction or judgment of some kind. Even though these scenarios are not related to the current happenings in the Pacific, are they a preview of the types of things to come? Is the present development man-made or God-caused? What do you think? Whichever it may be, God is “over all and through all, and in all”(Ephesians 4:6).

John Livingston Clark is 67 years of age and lives in central Washington State. He has written two published books, and two published poems. His initial book is called, " God's Healing Hope: Breaking the Strongholds of Wrong Thinking." His second book, released in December of 2016, is a motivational book written to seniors titled, " Seniors: Are You Retiring or Recharging?" Both books are available on amazon. You can also view his writings on www.faithwriters.com. John is available to speak on a variety of topics. Visit me at jclarkministries.com
Previous Socialism, Christianity, and America
Next The Challenge of Extending True Forgiveness