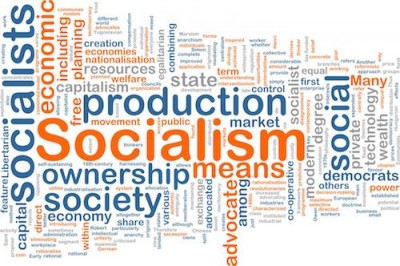 Since we have a member of the DSA (Democratic Socialists of America) running for president, and since he is attracting rather large crowds at his campaign appearances, I thought we should take a look at Christianity, socialism, and America. Are they compatible?

Some (non-Christians) have made the declaration that Jesus was a radical socialist. Jesus was not party affiliated. He was the Son of the Living God. His is the Savior of the world who, though sinless, paid the penalty for all sin. He was the fulfillment of the law. He was not a socialist.

His teachings were, indeed, viewed as “radical” to the rulers of the day. The Pharisees and Sadducees were telling everyone they must live by their man-made laws. The rules were impossible to keep and many were not what God was concerned with. Imposed by the self-righteous leaders of the church. The rules, when followed to the letter, were to demonstrate one’s holiness–their “worthiness.” Those religious leaders were at the top of the hierarchy of the church. Perched on their “thrones” of righteousness, they dictated how everyone else must live. They were the Jewish political system of the day.

Jesus is not concerned with “political correctness.” He wasn’t concerned with politics at all. Jesus loves people–all people. He loves them so much that He gave His life that we may live. He was social, but He is no socialist.

Jesus cares about each one of us individually. He loves purely, giving no regard to whether His love is returned–whether we support His cause or not. We are free to follow Him–or not, to obey His Father, our Heavenly Father–or not.

Jesus does not, however, tell us that sin is acceptable. Neither does He tell us that following rules and being kind and generous will make us righteous. We are utterly unworthy to speak His name. Yet it is only through His name we can hope to be saved.

God does not call nations to righteousness. He calls the individuals within the nations so that it may be found righteous.

Jesus fed the 5,000 and healed the sick. He gave sight to the blind and broke bread with sinners. He followed the instruction of His Father–not that of the ruling class. He showed others how to be generous and kind so they may choose to follow His example. He didn’t threaten them with jail for politically incorrect behavior and speech. He did not demonstrate His generosity by taking the resources from one to give to another.

There is one fundamental difference between socialism and Christian responsibility. Socialism implements the absolute authority of government. Man’s laws are followed to avoid jail. Christian responsibility is accepting accountability and choosing to follow Jesus example. It is standing for righteousness, out of love and obedience to the One who is Absolute Authority.

Matthew 20:24-28 24 “The other ten followers heard this. They were angry with the two brothers. Jesus called them to Him and said, ‘You know how the kings of the nations show their power to the people. Important leaders use their power over the people.  It must not be that way with you. But whoever wants to be great among you, let him care for you. Whoever wants to be first among you, let him be your servant. For the Son of Man came not to be cared for. He came to care for others. He came to give His life so that many could be bought by His blood and made free from the punishment of sin.’ ” (NLV)

Why do you think many eagerly embrace man’s authority over them yet they reject the divine authority of our Creator? Do you think the DSA can be the facilitator of His commands?

Melinda is currently the worship leader at her small church in rural America. Married for 23 years, she and her husband Larry have one son. She is the Director of Mailing in the print/mailing industry by day and freelance author by night. Her desire to write is a passion borne from tragedy. God used it to take her faith to a much deeper level. Melinda is a freelance writer and member of FaithWriters. She joined the TBL team in March 2014. Believing we are citizens of a greater ‘kingdom,’ her articles for The Bottom Line examine governmental responsibility, citizen involvement and current political topics. With the great wisdom contained in scripture as her guide, she looks at today’s political environment from a Biblical perspective. She prays her words will prompt the reader to view citizenship - and every aspect of their life, through the eyes of faith. Col 3:17 To read more of Melinda’s writings on her faith, hope, and life visit her blog Still Living Still Loving or her page at Faithwriters.com. You can also follow her on Twitter @MKZbk.
@@MKBzk
Previous Our Hope: Restoration
Next Is A Warm Pacific Ocean Killing Sea Life?