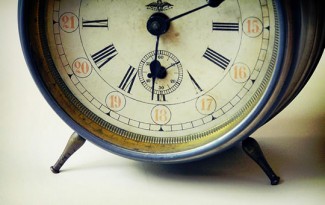 Is God Ever Late?

Life’s most critical moments—the ones that have you on your hands and knees, desperately calling on the Father—can lead you to believe that God is indifferent. Calloused. Tragically late.

You prayed for healing. But it hasn’t come.

You prayed for a mended marriage. But it hasn’t happened.

You prayed for job. But your applications go unanswered.

You prayed for a child. But the tests are negative month after month.

You prayed for a relationship. But the right one still hasn’t come along.

Mary and Martha believed Jesus was tragically late, as well. In John 11, we read about Lazarus—a beloved friend of Jesus. Take a look at his story:

“Now a man named Lazarus was sick. He was from Bethany, the village of Mary and her sister Martha. (This Mary, whose brother Lazarus now lay sick, was the same one who poured perfume on the Lord and wiped his feet with her hair.) So the sisters sent word to Jesus, ‘Lord, the one you love is sick,’”
(John 11:1–3).

The one you love, they wrote. This sweet term of endearment paints a picture of a close relationship. This was Jesus’ friend.

“When he heard this, Jesus said, ‘This sickness will not end in death. No, it is for God’s glory so that God’s Son may be glorified through it.’ Now Jesus loved Martha and her sister and Lazarus. So when he heard that Lazarus was sick, he stayed where he was two more days … ” (John 11:4–6).

Scandalous, isn’t it? Jesus knew His dear friend was sick. He received the letter—heard their pleas—and does nothing. He waited. He didn’t move—even though tragedy loomed.

Or so it seems.

We must remember that Jesus is far more concerned with the Father’s will and His ultimate glory than our immediate and long-term comfort.

“On his arrival, Jesus found that Lazarus had already been in the tomb for four days … When Mary reached the place where Jesus was and saw him, she fell at his feet and said, ‘Lord, if you had been here, my brother would not have died.’ When Jesus saw her weeping, and the Jews who had come along with her also weeping, he was deeply moved in spirit and troubled,” (John 11:17, 32–33).

If only. If only… Do you hear the hopelessness in Mary’s cries when she finally hears from Jesus? I can only imagine the millions of thoughts that were going through her head: Where have you been? Did you get the message? It’s too late.

Her brother was dead. Her world had shattered.

Jesus was deeply moved by her pain. He wept—empathized with her—even though He knew the miracle He was about to perform.

While there is tremendous theological depth to this miracle, I only want to bring your attention to Jesus’ timing:

You see, in the time that it took Jesus to get there, a large crowd had gathered to mourn the death of Lazarus. He had been dead for four days. In that day, tradition held that the soul stayed with the body for three days before departing. Perhaps Mary had held out hope even after Lazarus passed. But four days? Four days was just too long.

But now? Now Jesus had an audience. And when He called Lazarus from the tomb, wilted and wrinkled linens clinging to his body, a crowd of witnesses was present. And do you know what happened?

“ … many of the Jews who had come to visit Mary, and had seen what Jesus did, put their faith in him.”

Although Jesus appeared late by modern conventions, many came to know Jesus as a result of Mary and Martha’s temporary pain. In the end, Mary and Martha were relieved from their grief, Lazarus from his illness and consequent death, and many were restored eternally because Jesus was able to use pain for His Father’s glory.

What you are going through—whatever it may be—is not something to be taken lightly. This isn’t meant to explain away your deep heartache and pain. And it isn’t meant to suggest a miracle is on the way. But it is meant to pose a question—a hard question: If one person came to know Jesus, and was eternally restored, would not your circumstance be worth it?

I’ve been there. But in every season, God shows up. Not on my time—but on His time. And in hindsight, His timing is always far better than my own. While I see just pieces of the picture, He sees the whole puzzle put together. And every time He has used the painful seasons in life to teach me and mold me, and to ultimately bring Himself glory. I know this not because I’ve always seen how He’s used my circumstances for good, but because I trust the words of Romans 8:28 that say, “And we know that in all things God works for the good of those who love him, who have been called according to his purpose.”

He doesn’t necessarily work things out for my good—but for good.

Remember: Jesus is far more concerned with the Father’s will and His ultimate glory than our immediate and long-term comfort.

Can you say the same thing about yourself?

I encourage you to mediate on two questions:

What is God trying to show me—teach me—in this season of heartache?

And: If one person came to know Christ as a result of my circumstance, would it be worth it?

is a freelance writer and contract copywriter who lives in the seacoast region of New Hampshire with her husband, Eric-Thomas,of five years. She currently serves alongside her mother as the Marketing Director for God’s Girls Christian Store and More, a online retail store serving the southern New England region. Her work has been featured in several print and online publications, and she is the recipient of two Faithwriters’ Editors Choice Awards for her short stories, which are scheduled for publication in the Mixed Blessings series. Her first book, Fragile: 30 Days of Hope for the Anxious Heart, is now available at samanthaarroyo.com. She can be reached at [email protected].
Previous Parenting On The Battlefield
Next Babies: God’s Second Chances (Part 1)