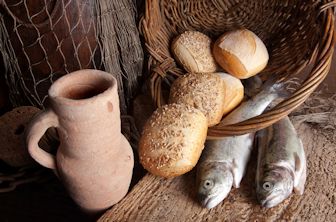 Gen 1:1 In the beginning God (Elohim) created the heaven and the earth.

In Gen 1:1, the very first verse of the Bible, the Hebrew name used for God is Elohim. You may be asking yourself, “Who is Elohim?” Elohim is the plural name for God. It actually means “plurality in unity” and signifies that God the Father, Jesus Christ, and The Holy Spirit were all active during creation.

In John 1:1-3 we have similar account attributing Jesus Christ, as the Word, as being the Creator of all things. Lets take a look at this scripture:

So, John 1:1-3 clearly states that the Word, who is Jesus, was with God the Father, and all things were made by Him. This is very significant. I mean, Wow! It’s actually rather hard to express the importance, but all-in-all, we wouldn’t be here, or anything else. if it weren’t for Jesus Christ. It’s a wonder why people would ever want to reject Him who created them. It just baffles me at times.

However, there are some hidden gems in the Bible where we actually catch Jesus, as the Creator, creating some more. Lets look at one such instance:

Matt 14:15-21 And when it was evening, his disciples came to him, saying, This is a desert place, and the time is now past; send the multitude away, that they may go into the villages, and buy themselves victuals. But Jesus said unto them, They need not depart; give ye them to eat. And they say unto him, We have here but five loaves, and two fishes. He said, Bring them hither to me. And he commanded the multitude to sit down on the grass, and took the five loaves, and the two fishes, and looking up to heaven, he blessed, and brake, and gave the loaves to his disciples, and the disciples to the multitude. And they did all eat, and were filled: and they took up of the fragments that remained twelve baskets full. And they that had eaten were about five thousand men, beside women and children.

Did you catch it? There were only two fishes and five loaves and suddenly everybody has eaten; with twelve baskets of food left over. Wow again! Jesus was creating food for the people. That’s right. Our Creator knew the needs of the multitude and He took on His role as Creator and made food for them. Pretty amazing stuff.

Friends, Jesus has many roles, with Savior being the pinnacle of them all, but I would assert that being our Creator is right up there as well. I mean if we never existed who would there be to save? Just something to think about. So lets take some moments out of our day to praise our Savior and our Creator. Let’s praise Him for who He is and all He has done for us. Let’s make our God number one in our lives and give Him the praise and glory He deserves. Thank you for reading and God bless.

Joel M. Bauer is a 45-year-old U.S. Army Veteran from Dunn, NC, which is just outside of Raleigh. After being honorably discharged from the U.S. Army, he attended school at Taylor University, a Christian liberal arts school, in Fort Wayne, IN, where he received his BS in social work and psychology. He has worked in such places as a homeless shelter, a community based treatment center for severe mental illnesses, a school for troubled students, and other social service agencies. His current endeavor is to build The Bottom Line website into a site that inspires both Christians and non-Christians alike, and brings glory to God.
Previous A Movie Of Hope, After The Storm
Next Your Call to Serve God in Music