Breaking News
Home / Faith / A Movie Of Hope, After The Storm 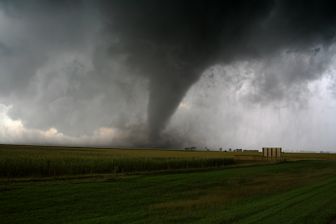 A Movie Of Hope, After The Storm

A Movie Of Hope, After The Storm

On May 20, 2013, the town of Moore, Oklahoma was quietly going about its business. People were at their jobs. Children were at school. It was a peaceful and typical day of activity, fun, and recreation, but that was about to change. That’s when the 1.3 mile-wide funnel cloud of an F-5 tornado touched down. It stayed on the ground for 39 minutes and traveled 17 miles, destroying everything in its path. Twenty-four people were killed and 377 were injured, including seven children at an elementary school. Over 1,100 families were left homeless. With winds of over 200 miles per hour it was one of the most powerful and destructive storms in the history of the state. One weather expert stated that it had a magnitude of destruction measuring more than eight times greater than the atomic bomb dropped on Hiroshima, Japan at the end of World War II.

Not only did the tornado leave its aftermath of devastation but also many stories of parents, children, and first responders, like the teacher who physically protected her students with her body. This and many other stories are now being told in a faith-based inspirational movie called, “Where Was God: Stories Of Hope After The Storm.” It seeks to answer the question of how life’s storms affect people’s faith. The documentary was given this name by the producer, Steven Earp, lead pastor of Elevate Church in Moore, because in his words, “It is okay to ask God ‘why?'” Even though the “why” cannot be answered the film shows the “where.” God was in the midst of the storm. Steven Earp said, “There is not a single thing that we could ever go through that our heavenly Father does not understand, and there is not a single dark place that He has not already walked.”

During the week of May 14th, one year after the storm, the film made its debut at a theater in Moore, Oklahoma. It has been billed as a movie that will lead people to the Lord. It is currently available for nationwide viewing by organizations or churches that desire to host the event. The stories of physical, emotional, and spiritual recovery depicted in the movie would, of course, be helpful to any community that has experienced destructive storms. Go to the website www.wherewasgod.com to email a request for showing the movie in your community.

John Livingston Clark is 67 years of age and lives in central Washington State. He has written two published books, and two published poems. His initial book is called, " God's Healing Hope: Breaking the Strongholds of Wrong Thinking." His second book, released in December of 2016, is a motivational book written to seniors titled, " Seniors: Are You Retiring or Recharging?" Both books are available on amazon. You can also view his writings on www.faithwriters.com. John is available to speak on a variety of topics. Visit me at jclarkministries.com
Previous Letting Go and Trusting God
Next Jesus the Creator