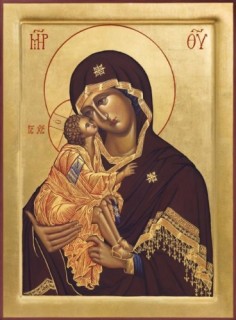 In the United States approximately 75%-80% of the population calls themselves Christian.  Out of that large group, only 1% is part of an Orthodox Church (OC).  There are a variety of types of Orthodoxy.  They generally come from Greece, Russia, or various eastern European countries.  Worldwide, the OC numbers about 240 million adherents.

Thus in the United States, especially amongst Protestants, there is a general lack of information and understanding about Orthodoxy.  A large portion of this focuses on the perception that members of the OC worship sacred icons (artwork) within their churches.  To better understand this key theological concern The Bottom Line (TBL) recently spoke with UK-based Iconographer Christabel Anderson (http://www.christabelanderson.com/).

TBL: Is being an iconographer a full-time job? How many icons do you create in a given year? Are these just commissioned by churches, or also individuals?

CA: Yes, working as an iconographer is a full time job.  The work is demanding and it takes many years and a great deal of commitment to learn and understand all that is required.  As a minimum, as well as knowing the iconographic theology, language and techniques, the iconographer should work with the blessing of the Church, and carry out the work in prayer.

I create a small number of pieces each year.  The work entails total personal devotion and commitment to every aspect, from the making of materials to their application.  I also spend a great deal of time considering and contemplating the theology which lies behind each piece and try to carefully discern and bring out God’s intention for it. The work is for both individuals and churches.

TBL: Explain some of the mediums you use, and why do you use these specifically?

CA: I make traditional icon panel paintings in egg tempera, miniature paintings in hand made watercolor on vellum, and more recently have been working in cloisonné enamel and enamel miniature painting.  I am a specialist in gilding techniques and the traditional preparation of materials such as paints and inks, and also have experience working in many other mediums.  However, I feel that these have the greatest potentiality for subtlety of expression, nuance and luminosity, which reflects a long held interest in apophatic theology and expressions of God’s “Uncreated Light”.

Orthodox iconography is stylised and entirely flat or in low relief as we do not believe in using naturalistic imagery intended to deceive the eye or making anything which may look like an idol.  Three dimensional sculpture is primarily used in the Roman Catholic Church and is also present in some Protestant churches.

TBL: There are very few Orthodox Church members in the USA. How would you describe this Church to Christians within the USA who probably have never been to such a service and likely do not even know an OC member?

CA: The Holy Orthodox Church is the ancient living Church founded by Jesus Christ and described throughout the New Testament.  It has millions of believers worldwide, gave us the Creed and the Bible, and is a treasury of God’s grace and love on earth.  All other Christian churches and sects can be traced back to it historically.  (TBL Note: This stance is also declared by the Roman Catholic Church.) We follow the teachings of Our Lord and Savior Jesus Christ and adhere to Holy Scripture and Holy Tradition.  For the Orthodox, adherence to Holy Tradition does not mean being old-fashioned or antiquated, but instead means participating in the perpetually renewing, personal and direct experience of God, using modes of practice which have been handed down to us with faith and love since ancient times.”

We also venerate the Mother of God and the Saints. While reading is always valuable, the best way to learn about the Orthodox Church is to attend the Divine Liturgy at a local parish or monastery.

TBL: Why is venerating icons different from worship?

CA: The veneration of icons and other holy objects in the Orthodox Church is not an act of worship but one of honor and deep respect.  The word “veneration” derives from the Greek douleia or proskynesis and is a way by which Orthodox Christians show their reverence, love and great appreciation for that which is holy.  This is very different to worship (Greek: latreia), which the Orthodox Church clearly teaches is for God alone.  This distinction in meaning and practice is often not recognized in translations to the English where the word ‘worship’ is frequently inaccurately applied.  The Orthodox Church has been very clear about the distinction between veneration and worship since the Second Council of Nicaea in AD 787 where the matter was deliberated upon in depth.  We believe that the honor given to an icon or holy object passes to the prototype (subject person) and the veneration is not directed at the object itself.  When we shall in God’s mercy behold the prototype face to face, the icon in our mortal life will have served its purpose as a window to the eternal Kingdom of God.

(The Bottom Line does not advocate or endorse the Orthodox Church specifically, rather this Spotlight article is ecumenical and informational in nature.  We do believe that Christians of all walks should learn more about the beliefs and cultures of other Christians.  Please –respectfully- share your views and  opinions on the subject in the Comments section below.)

Ken Lambert, D.Min, lives with his wife and twin boys in southern New Hampshire, and has written for a variety of religious and secular publications. He is co-author of Top Ten Most Influential Christians- since the Apostles, and is an adjunct instructor for Agape Seminary (Church History, Wisdom Books).
Previous Never Too Old To Set New Records In Golf
Next The Unconscious World Of Free Entertainment