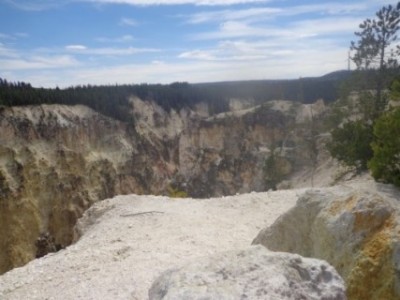 One of the most breathtaking features in Yellowstone is the “Grand Canyon of the Yellowstone.” The panoramic viewpoint captures the various striations in the rock formations leaving you wondering how something so enormous could have possibly formed.

Evolutionists would state that the area was formed over 590,000 years created by lava flows which created a thermal basin in some areas while in other places it “blocked rivers and streams forming lakes that overflowed and cut through the various hard and soft rhyolites, creating the canyon.” As time passed, “the canyon was blocked three different times by glaciers. Each time these glaciers formed lakes, which filled with sand and gravel.” This timely glacial melting process created additional flooding, which “deepened it, and removed most of the sand and gravel.” When viewing the canyon today, evolutionists date the appearance “from about 10,000 years ago when the last glaciers melted. Since that time, erosional forces (water, wind, earthquakes, and other natural forces) have continued to sculpt the canyon.” (National Park Service)

Notice that the entire history of the Canyon’s life includes three key points: Formation over a long period of time, extreme temperatures from lava and glaciers, and slow erosion.

Taking a look through biblical lenses, agreements can be made about the Grand Canyon of Yellowstone. It took time, the causation was from extensive volcanic activity and flooding, and erosion played a part in the Canyon’s formation. However, the amount of time that it took to create the Canyon was not the estimated 590,000 years, but instead it took place during “the start of the Ice Age in the Northern Hemisphere (the Pleistocene) roughly coincide(ing) with the Babel judgment, around a century or so after the Flood (perhaps 2250 BC). (Answers in Genesis)

The outcome of the Canyon coincides with the “Two particular aspects of the Flood (which) were instrumental in causing the Ice Age: (1) extensive volcanic activity during and after the Flood, and (2) the warm oceans following the Flood. We know the extent of the Ice Age because the glaciers left features on the landscape similar to features we observe around glaciers today.” (Answers in Genesis)

Okay, you can maybe understand the extreme differences in temperatures causing lava flows and glacial melting, but what about the element of time? Doesn’t erosion have to take place over a long period of time? No, that is a false assumption. “Geologists repeatedly discover the catastrophic effects of local flooding on the earth’s surface, resulting in the same conclusion each time: that substantial amounts of water can have the same geological effect in a short period of time (even laying down rock layers) that hypothesized millions of years of slow water flow would have.” (Answers in Genesis). In other words, given the extensive forces of the volcanic activity and the increased process of melting glaciers, the Canyon’s erosion was a rapid occurrence forming out the Canyon walls. This rapid formation is similar to results in the Grand Canyon and the eyewitness account of Mt. St. Helens.

is an author and editor for The Bottom Line Ministries as well as a member of Faith Writers. Currently she teaches high school language arts. She is a mom to four amazing blessings and enjoys every moment life has to offer. Renee has a fervor and drive to learn, she loves to read and spend time with her family, and is involved with her local church ministries. Humbled by God’s gift of words, she has a passion to write what the Holy Spirit has placed in her heart. She hopes to publish her in-progress book someday, but in the meantime, is honored to be placed as part of the TBL writing family and is holding on to the ride wherever God is leading. Renee and her family reside in their country home in Holland, Iowa.
Previous Sharing The Gospel Through The Arts
Next COVET vs WANT…One & the Same?