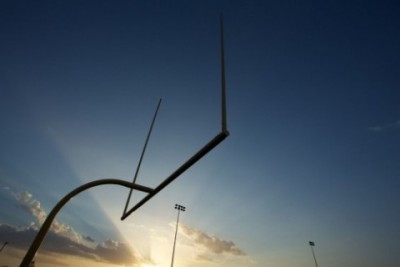 Reward Found Through the Narrow Way

Reward Found Through the Narrow Way

Standing straight at the end of the field perfect in dimension resides an object necessary in winning the game of football.  The opening of the goal rests in a welcome stance ten feet off the ground, almost twenty-four feet across, with the upper posts protruding at least twenty feet into the air.  A minuet shift in any direction and the pigskin veers outside of the goal denying the player points.  The only guarantee to hitting the mark is straight down the middle, a wide goal but narrow way.

A scene from one of my favorite movies paints this very image.  In the film “Facing the Giants”, David, the lead kicker is struggling with his ability to hit the necessary mark since his only kicking experience has been as a soccer player, not football.  Time after time the ball breaks to wide left or wide right, but never down the middle.  Frustrated with his failure, David’s coach encourages him and simply states,

This scene is a metaphor for life.  Think about it.  There are a wide variety of choices (a broad way) when it comes to claiming to know or at least have an idea of how to get to heaven.  But just like David.  When he has too much variety in his kick, it leads to destruction.  Yet, when David focuses in on straight and narrow he finds the way that leads to life where the goal (the reward) resides.

One idea the coach emphasizes to David is that it doesn’t matter what the ball looks like going through the goal, it’s going in through the narrow way that scores the points. God knows that our lives are messy, ugly, and broken just like the football can be messy, ugly, and at times broken.  He just wants us to aim for the narrow way and not worry so much about how it looks entering in.  You see, Jesus is the narrow way.   He paved the way for our salvation.   The ironic thing is that it is so simple yet we want to complicate it.  We want choices just like the world gives us.  If we don’t like the first choice, we will move on to the second, or third, or fourth, but when given just one choice we wonder why?  But there truly is only one way and that is when we repent and turn from our sins (no matter how ugly), ask for His forgiveness, and believe that we are forgiven.

is an author and editor for The Bottom Line Ministries as well as a member of Faith Writers. Currently she teaches high school language arts. She is a mom to four amazing blessings and enjoys every moment life has to offer. Renee has a fervor and drive to learn, she loves to read and spend time with her family, and is involved with her local church ministries. Humbled by God’s gift of words, she has a passion to write what the Holy Spirit has placed in her heart. She hopes to publish her in-progress book someday, but in the meantime, is honored to be placed as part of the TBL writing family and is holding on to the ride wherever God is leading. Renee and her family reside in their country home in Holland, Iowa.
Previous Wisdom, Politics, Faith, and Fear
Next Breaking Through Autism with Disney