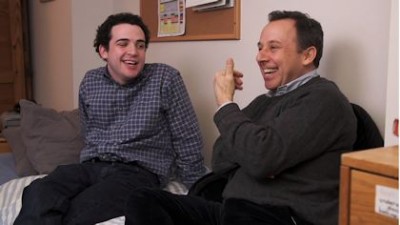 Breaking Through Autism with Disney

Owen Suskind was your typical boy until age 3 when he began suffering from regressive autism. This greatly impaired his daily functioning skills, such as eating, sleeping, and speaking. The only thing that held his interest watching his library of Disney movies with his brother. At first this concerned Owen’s parents, but then they realized Owen was able to imitate what he was watching. This opened up a window of opportunity for Owen’s family.

When Owen reached age 6, his father, Ron Suskind, pulled out an Iago puppet, a character from the movie Aladdin, and found he was able to enter Owen’s world and communicate with him. In fact, Owen was able to express exactly how he felt. Since then, Owen’s family has learned to take on the parts of various disney characters, and act out scenes from their movies in order to communicate with him.

Owen, now 22, has his own documentary coming out soon about the strides he has made with autism. He also has a girlfriend, and he gets his dating advice from the Disney movies he watches. His family continues to communicate with him through Disney themes and things are certainly looking up for Owen.

Joel M. Bauer is a 45-year-old U.S. Army Veteran from Dunn, NC, which is just outside of Raleigh. After being honorably discharged from the U.S. Army, he attended school at Taylor University, a Christian liberal arts school, in Fort Wayne, IN, where he received his BS in social work and psychology. He has worked in such places as a homeless shelter, a community based treatment center for severe mental illnesses, a school for troubled students, and other social service agencies. His current endeavor is to build The Bottom Line website into a site that inspires both Christians and non-Christians alike, and brings glory to God.
Previous Reward Found Through the Narrow Way
Next “I am Gabriel” Movie Review