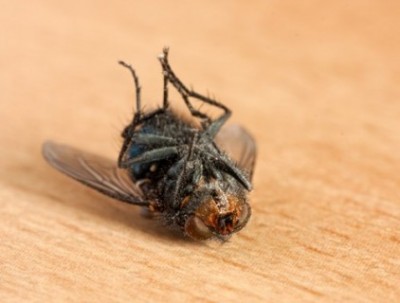 They came at me in an all out fleet attack WWII bomber style diving and gliding right under my nose-literately.  Their torpedo like wings swarmed around my head as if I was a landing strip.  The constant buzz droned past my ear replicating the sound of a runway lined with jetliners ready for take off.  Whoever was working the control tower was allowing the wicked ways and sounds of this miniscule pest to create havoc in my own little world as I tried to complete my night’s work.

Grabbing hold of the only weapon I knew to eliminate this monstrous and seemingly unstoppable beast, I began to wage my own war of retaliation and commenced killing one of the most irritating insects known to man in my opinion-“The Fly” (coming in 2nd best after the mosquito).

In the midst of my frustration, I began to make a connection to the fly and my reaction to what it was doing in my life at the moment.  I realized that my mind was becoming fixated on this minuscule distraction so much that instead of completing the task at hand and tuning out the annoyance, my eyes began to dwell on the “why” this insect was getting in the way.

Sometimes in life, we do the same thing.  We sit down to try and do our work but for some reason there is one little dollop of some issue that keeps distracting us from the job to be accomplished.   At times this distraction may be of our own doing (i.e. texting, Snapchat, Twitter, Instagram, Facebook, a comment we made to a co-worker, spouse, or child, an established habit, etc-) which we can lay claim to and put to a stop after we recognize what the problem is.  Once we are able to deal with the problem, our mind is usually cleared from the original distraction and we can finally continue on with our work.

Other times the distraction comes from the Spiritual Realm and the enemy tries to use anything he can find to create a wedge of disruption that will turn our focus away from where God wants us to be.  In these times, we must act with discernment to recognize the truth for what it is and the lies for what they are.  By keeping a close walk with God, we will be able to see the truth for truth and the lies for lies.

In James he states that if anyone lacks wisdom we are to come to God and ask Him because he will freely give it to us without being disappointed that we don’t know.  But, when we do come to ask, we must ask in faith without any doubt that God will give us the wisdom we need “for he who doubts is like a wave of the sea driven and tossed by the wind.” (James 1:5-6)

That night I recognized the fly was not something I had caused but instead it was being used as a strategy from the enemy in attempt to pull me away from God’s work I had to do that night-deliver this message to the reader in hopes of seeking and saving the lost.   “For God so loved the world that He gave His only begotten son that whoever believes in Him should not perish but have eternal life.” (John 3:16)

is an author and editor for The Bottom Line Ministries as well as a member of Faith Writers. Currently she teaches high school language arts. She is a mom to four amazing blessings and enjoys every moment life has to offer. Renee has a fervor and drive to learn, she loves to read and spend time with her family, and is involved with her local church ministries. Humbled by God’s gift of words, she has a passion to write what the Holy Spirit has placed in her heart. She hopes to publish her in-progress book someday, but in the meantime, is honored to be placed as part of the TBL writing family and is holding on to the ride wherever God is leading. Renee and her family reside in their country home in Holland, Iowa.
Previous Women in Christian Music
Next Overcoming the Overload