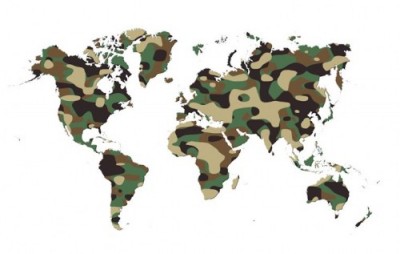 Mike Huckabee recently said that Christians thinking of joining  the military might want to consider waiting until Obama is out of office. He has called it “one of the great tragedies of our time.” Never has there been a time in history of a “hostile work environment” toward Christians in the armed forces.

Last year chaplains were told they could not talk about their faith, which in essence, is telling them they cannot fulfill their life mission. One was disciplined for expressing his Christian faith and using biblical passages as part of a suicide prevention training class. A Navy chaplain was removed from his position because of his teaching against homosexuality and sex outside of marriage.

“This has gotten so bad,” says journalist Michael Snyder, “that dozens of top officers that did not agree with Obama’s views have been forced out of the military in recent years. One officer said, “I believe there are more than 137 officers who have been forced out or given bad evaluation reports…because of their failure to comply to certain views.” Another stated that “…it is unprecedented…for the number of four-star generals to be released of duty, and not necessarily relieved for cause.”

The bright side to all of this is that there is an “army of the Lord” that is holding true to “the faith once delivered to the saints” (Jude 1:3). It is comprised of both military and civilian personnel who are fighting in the battle for spiritual truth and morality. Enlistment is open to anyone, of any age. The only requirement is to recognize the Lord Jesus Christ as your Commander-in-Chief. Complacent Christians need not apply because all new enlistees will be expected to “put on the full armor of God…to stand firm against the schemes of the devil” (Ephesians 6:11-13).

The mission of the army of the Lord is summed up in the words of an old hymn very seldom sung: “Onward Christian Soldiers.”

“Like a mighty army moves the Church of God; brothers, we are treading where the Saints have trod. We are not divided; all one body we. One in hope and doctrine, one in charity.” (Stanza’s one and three, and chorus)

What position can you assume in the army of the Lord?

John Livingston Clark is 67 years of age and lives in central Washington State. He has written two published books, and two published poems. His initial book is called, " God's Healing Hope: Breaking the Strongholds of Wrong Thinking." His second book, released in December of 2016, is a motivational book written to seniors titled, " Seniors: Are You Retiring or Recharging?" Both books are available on amazon. You can also view his writings on www.faithwriters.com. John is available to speak on a variety of topics. Visit me at jclarkministries.com
Previous Chaos: The Result of Rejecting Divine Authority
Next The Poisonous Root of Bitterness