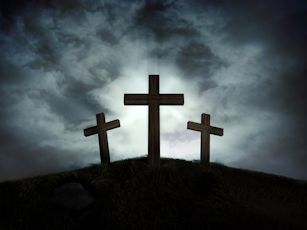 At ground zero in New York City there is a legal battle over a 17-foot cross-shaped beam that was excavated from the rubble. It is to be used as a memorial for those who lost their lives in 9/11, but atheists are fighting it.  On Mt. Soledad outside San Diego, California, stands a war memorial cross. Having been raised in that city, I have been on that mountain and have stood at the foot of that cross. It too, is the subject of much controversy.  There was a cross on a freeway onramp to highway 15 in Lake Elsinore, California, that was placed there by a woman whose son was killed crossing the street. It had to be removed under pressure from the American Humanist Association.

The cross has become a figure of controversy. Atheists do not like it because it is a symbol of religious faith and expression. Many people do not understand the spiritual significance of the cross.  This scenario will change dramatically in Portland, Oregon, on April 19, the day before Easter. On that day 900 crosses will be carried through the city on a designated route. It is being called, THE CROSS WALK. The 12 by 8 inch wooden crosses, each weighing 50 pounds, will be carried by 3 teams of 300 people, and it is estimated that the procession will stretch for a half mile. It will culminate with singing, prayer, and speakers at the Oregon Convention Center in downtown Portland.  This came about as a result of a vision that God gave to a man by the name of Scott Stewart, after attending a conference hosted by Men At The Cross Ministry.  Scott attends the Good Shepherd Community Church in a Portland suburb.

The cross is a symbol of the sinfulness of mankind, and maybe that is the reason why many people object to it. We, as Christians, know that it is also a symbol of the undeserved grace of God through His Son, Jesus. I Corinthians 1:18 sums it up very well. “For the word of the cross is to those who are perishing foolishness, but to us who are being saved, it is the power of God.”  The CROSS WALK will also be a reminder to all of us, in a spiritual sense, of what Jesus said in Luke 9:23, “If anyone wishes to come after me, let him deny himself and take up his cross daily, and follow me.”  The cross will literally be taken up in Portland, Oregon, on April 19.

John Livingston Clark is 67 years of age and lives in central Washington State. He has written two published books, and two published poems. His initial book is called, " God's Healing Hope: Breaking the Strongholds of Wrong Thinking." His second book, released in December of 2016, is a motivational book written to seniors titled, " Seniors: Are You Retiring or Recharging?" Both books are available on amazon. You can also view his writings on www.faithwriters.com. John is available to speak on a variety of topics. Visit me at jclarkministries.com
Previous “Les Mousserables” Gets it Right
Next Drink From the Fountain of Youth