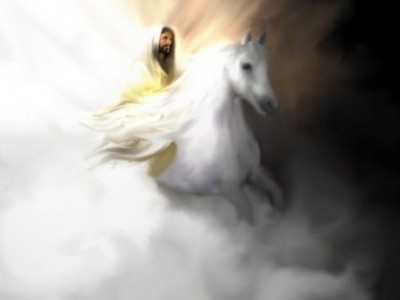 There was a blockbuster movie made in 1963 called “The Great Escape.” It was based on a true story from World War II where a group of allied soldiers attempted a massive escape from a German concentration camp. The German Commander strongly discouraged the prisoners from trying to escape because of the features in the new camp; escape would be impossible. But the prisoners did attempt a massive escape and according to the movie all but two prisoners were captured and returned to the German camp or shot to death by German troops who were supposed to return the prisoners to the concentration camp.

And I saw heaven opened, and behold a white horse; and he that sat upon him was called Faithful and True, and in righteousness he doth judge and make war. His eyes were as a flame of fire, and on his head were many crowns; and he had a name written, that no man knew, but he himself.  And he was clothed with vesture dipped in blood: and his name is called The Word of God. Revelation 19:11-13

So this brings us to our spiritual counter part of the” great escape”; the time when Jesus will come in the clouds and defeat Satan once and for all and take His bride home to heaven. The church will escape the very dark times that will be present on planet earth at that time. But in this “great escape” the “prisoners” will not be captured and returned to earth. They will spend eternity with Jesus and God forever.  What a glorious day that will be when the trumpet is heard throughout the whole earth signifying the second return of Jesus Christ.

With the second appearance of Jesus He will come with fire in His eyes and many crowns on His head. He will enter human history again this time to put an end to it once and for all. He will be recognized as the Lord of Lords and King of Kings riding triumphantly on His white horse. What a glorious event that will be when He comes again as the Warrior-Lord who will remove sin, death and Satan for all eternity. Jesus is saddling His white horse and His angelic army is preparing for the final battle between Satan and Jesus. We know who wins this final war! Those left on the earth will be caught up into the air to meet their Lord! Revelation tells us there will be a swift sword that goes out of His mouth to subdue the nations and He will rule the nations with a rod of iron. Come Lord Jesus! Come quickly amen!

Are you looking for the second coming of Jesus Christ?  What are you doing to prepare?

Greg is a born again believer who testifies to the absolute transforming power of God's word. Greg has been called to full time ministry and He has known Jesus for most of his life. Greg received his degree in Pastoral Ministries from what was formerly Bethany University in Santa Cruz,California. View Greg blogs on iwriteforjesus.com. Greg has a book published on " To Jesus Christ the High Priest of my confession: A personal Testimony." find it on http://www.amazon.com/Christ-Priest-Confession-Personal-Testimony/dp/1507706847/ His testimony in short form is published in "Trials and Triumphs II" on http://www.amazon.com/Trials-Triumphs-II-FaithWriters/dp/1498416012/. This book is filled with 50 inspirational testimonies and is a project of Faith Writers.
Previous Brains and Guts — Is There a Connection?
Next Alcoholism: Beyond the Bottle