Breaking News
Home / Faith / The Potholes In Our Lives 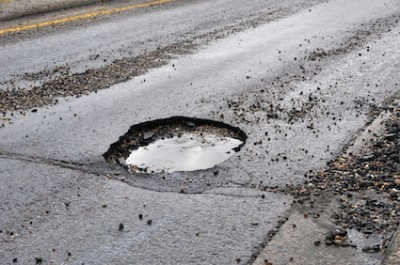 The Potholes In Our Lives

I hate potholes!  They are the scourge of the earth.  They are the opposite of anything good.  I have come to the conclusion they are from the devil!

Okay, breathe!  I have recently been up north, well, north of North Carolina.  And while there, I found potholes I could have only dreamed about.  They were everywhere.  Anywhere there could have been snow and ice, which was actually just about every nook and cranny, there were potholes.  And no matter how careful I was with my vehicle I was often caught unawares and landed in one.  Sometimes, almost literally!

Now, potholes are not new to me.  I was born and raised in the north, and once I started to drive, I had to learn how to deal with them.  But I was never the perfect “pothole dodger”.  They would appear out of nowhere, and I would hit them.  I can remember lectures from my dad to be more careful, to slow down, and to do whatever I could do, within the bounds of the law, to miss one.  As I became a more experienced driver, I became better at managing the pothole dilemma.

Now, of course we have potholes in North Carolina!  But they are usually little holes.  The ones I saw recently look like they could swallow a cruise ship in one single gulp!  But I also realize that winter weather takes a huge toll on the roadways when they are constantly subjected to freezing temperatures, ice and snow.  And the part of the north I was in, was hit especially hard this year.

I came back down south and was pleased to see much smaller potholes.  Yes, we have them, and we have a lot of them.  But I sincerely cannot describe them as craters.  They are still prevalent, and can still cause much damage to any vehicle that hits them.

I have been thinking about the potholes in our lives.  We all have them.  They are holes that appear to be gaping, and ready to swallow us.  That is a sign of hopelessness.  They also present physical dangers, in that they can cause bumps and bruises, and at times leave scars. Spiritual warfare is like potholes in our lives.  When we put them all together, they are road maps of our daily struggles against our enemy, and the powers of darkness who try to convince us that we have no one who cares for us.  But we know One who says otherwise, don’t we?

We need not fall into the potholes that appear so often in our lives.  We are much bigger than they are, because we have Jesus living within us.  We are able to avoid the heartaches that come from fighting with the potholes that threaten to derail our journey through life.  Nothing can beat us when we use the weapon He has formed against our enemies … The Living Word of God.  Potholes, beware!  We fight with the LORD leading the charge!

When did you last feel like you were about to fall into a pothole?  Please go to www.mystoryofgrace.com and share that experience and how you saw the LORD working!

Lili lives in central North Carolina. She writes devotionals and Christian articles and has been published in e-magazines, newsletters, and articles. She is a member of Faithwriters.com. She and her husband Chuck love to travel, and are animal lovers as well. They are active in their local church. Lili credits God for any inspiration that allows her to write. It's all about Him!
@@ohiolili
Previous What Will the DJ Play?
Next Church Leadership: Clear Moral Direction is Needed