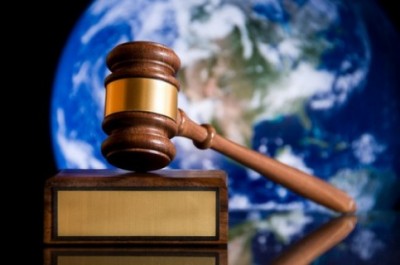 The “Real” Supreme Court Shall Issue Their Decision

Are we to be judged by nine (unelected) men and women who preside over a man-made bench?  Or, are we judged by the Father, the Son, and the Holy Spirit?  I’d like to think that the latter is the “true” Supreme Court; our lives (and our eternity) are in their hands- and not per the whims of 9 people in black robes.

The (U.S.) Supreme Court’s decree on “gay marriage” was a shocker for many, including this writer.  In a close 5-4 vote, these Federal judges decided that no State could prevent (or not acknowledge) a homosexual marriage.  By extension, this “created” gay marriage in the United States, nationally.  This occurred even though the U.S. Congress has never actually voted to acknowledge same-sex marriage.  Quite to the contrary, in 1993 the U.S. Congress specifically stated that marriage was between 1 man and 1 woman.  But, 22 years later we are living in a new world and a new country.

When looking at the composition of the Court, it is perplexing how they could vote as they did- given their background religiously.  The following is a list of the Justices, and their declared religions:

Out of nine judges, none are atheist or agnostic.  Six are Catholic, a Church which has been quite strict in their dogma that same-sex relationships and marriage is a sin- and is against God’s word.  The other three are Jewish, and up until 2006 there was really no dissention in the declaration that same-sex relationships were strictly forbidden by the Torah.  Since then, it has become more split and liberal in interpretation.

All said, if all of these judges were following their own declared religions and religious teachings in 2015, there is no way that they would have arrived at this decision.  Many of them clearly broke with their own church’s moral teachings and elected to instead practice “social engineering”- as many would argue.

Some are demanding that the judges on the “wrong side” of this decision (according to Christians and conservatives), should be impeached.  While that is legally possible, it is highly unlikely.  The last Supreme Court Justice to be impeached was in 1804.  As per the rules, until death the country is stuck with these nine we now have- unless one or some decide on their own volition to step aside and resign.  Of course that is equally unlikely.

So what to do now, and how to proceed and act?

There have been times when the Supreme Court has reversed course and declared an earlier ruling invalid or unconstitutional.  Perhaps that will happen, especially if the next U.S. President nominates a more conservative Justice, or maybe an Evangelical Justice.  (It does seem a bit odd that there are no Evangelicals on the High Court.)

Aside from that, Christians are to do what they can.  If they want to peacefully protest, that is well within their rights.  Different churches and denominations will have, and have had, their own internal struggles and battles with this sensitive subject; this ruling will not change that fact.  Parents will still need to teach their children right from wrong, in the best way they see fit.  And in the end, the “real” Supreme Court will eventually make their own ruling.  I’d like to believe that most Christians know what that ruling will be.

1 Sam 2:10 The adversaries of the LORD shall be broken to pieces; out of heaven shall he thunder upon them: the LORD shall judge the ends of the earth; and he shall give strength unto his king, and exalt the horn of his anointed.

How do you feel about the Supreme Court’s decision?  How do you think we should respond?

Ken Lambert, D.Min, lives with his wife and twin boys in southern New Hampshire, and has written for a variety of religious and secular publications. He is co-author of Top Ten Most Influential Christians- since the Apostles, and is an adjunct instructor for Agape Seminary (Church History, Wisdom Books).
Previous The Battle Over The Rainbow
Next The Danger in Playing the Comparison Game