Breaking News
Home / Faith / To Sue or Not to Sue? 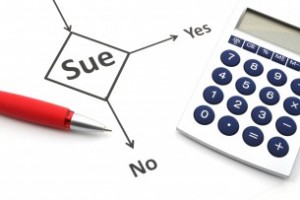 To Sue or Not to Sue?

Earlier this week, news broke of a lawsuit between two Christian parties.

A few more headlines come to mind, each involving devout Christians and lawsuits. All
were—are—valid cases. Each deserves justice. Each voice needs to be heard. But is a lawsuit the answer?

“If any of you has a dispute with another, do you dare to take it before the ungodly for judgment instead of before the Lord’s people? Or do you not know that the Lord’s people will judge the world? And if you are to judge the world, are you not competent to judge trivial cases? Do you not know that we will judge angels? How much more the things of this life! Therefore, if you have disputes about such matters, do you ask for a ruling from those whose way of life is scorned in the church? I say this to shame you. Is it possible that there is nobody among you wise enough to judge a dispute between believers? But instead, one brother takes another to court—and this in front of unbelievers!”

It’s pretty cut and dry: Church matters should be settled within the church walls. Like the apostle says: how can one expect a court, which holds a secular worldview, to judge the actions of a believer when believers are called to separate themselves from the world? (Romans 12:2)

The verses in Corinthians deal specifically with Christians suing Christians—discord among believers.

But do the “rules” apply outside of the church?

As GotQuestions.org points out:

“For Christians not to forgive each other and reconcile their own differences is to demonstrate spiritual defeat … However, there are some instances when a lawsuit might be the proper course of action. If the biblical pattern for reconciliation has been followed (Matthew 18:15-17) and the offending party is still in the wrong, in some instances a lawsuit might be justified.”[1]

And what are those “biblical patterns”? As Matthew 18:15–17 describes, the believer must first privately attempt to reconcile with the person who wronged them. If that doesn’t work, they are to take one or two others with them to confront the individual. And if that doesn’t bring about reconciliation, tell the church. The church is then responsible for trying to resolve it. If they can’t, the offender should be treated as one outside the church.

Once again, the rules seem to apply to conflicts within the church. If the first several attempts outlined above don’t bring results, is it then appropriate for one Christian to sue another? What if the offense in question has to do with medical malpractice? Murder? Or other criminal matters?

Romans 13:1–2 says, “Let everyone be subject to the governing authorities, for there is no authority except that which God has established. The authorities that exist have been established by God.  Consequently, whoever rebels against the authority is rebelling against what God has instituted, and those who do so will bring judgment on themselves.” (emphasis mine)

The bottom line is that Christ-followers must do everything possible to avoid involving the court. Resolving conflict, bestowing forgiveness–it’s all part of being a disciple of Jesus.

After all, if believers are following the same God and both parties are leaning hard into God’s Word, then a civilized resolution shouldn’t be a far-fetched ideal. Right? As Paul said, feuding Christians shouldn’t take up their problems before a non-religious court, but should resolve them internally. How can a Christian settle a matter with a non-Christian when their moral compasses are pointing in different directions?

Regardless of the situation—whether criminal or civil—seek wisdom. (James 1:5)

What do you think: To sue or not to sue? When is it okay—or is it ever?

is a freelance writer and contract copywriter who lives in the seacoast region of New Hampshire with her husband, Eric-Thomas,of five years. She currently serves alongside her mother as the Marketing Director for God’s Girls Christian Store and More, a online retail store serving the southern New England region. Her work has been featured in several print and online publications, and she is the recipient of two Faithwriters’ Editors Choice Awards for her short stories, which are scheduled for publication in the Mixed Blessings series. Her first book, Fragile: 30 Days of Hope for the Anxious Heart, is now available at samanthaarroyo.com. She can be reached at [email protected].
Previous Married to a Stranger
Next 5 Worst Things We Can Do To Our Minds