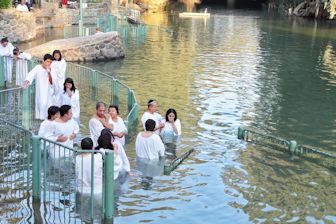 Friends, let’s take a minute to talk about the important matter of water baptism. I’m not here to argue with anyone about whether or not you have to be baptized to be saved or if babies should be sprinkled with water. I’m here to tell you that as followers of Christ, water baptism is a choice we should want to make. I will explain why.

First and foremost, Jesus did it. Not only did He do it for Himself and unto the Father in Heaven, but He did it as an example to us. In Matthew 3:13-17, we know that once Christ was baptized by John the Baptist, the heavens opened up and the Father spoke saying, “This is my beloved Son, in whom I am well pleased.” Wow, what a powerful statement. God the Father was giving Jesus a, “Good job Son” moment. If God the Father expected this of Christ and it pleased Him, then surely us doing this would please Him as well.

Next, let look at a very profound scripture on baptism. In Acts 8:27-39 we read about Philip and the Ethiopian eunuch. Philip preached the gospel to the eunuch and he is immediately responsive. Not only does he accept Philip’s word, but when he sees a body of water, the chariot they were riding on was commanded to stand still. The eunuch had such enthusiasm and asked to be baptized immediately. Philip confirmed the eunuch’s acceptance of Jesus Christ as the Son of God and immediately baptized him in the water.

There is an important lesson to be learned from the Ethiopian eunuch. Baptism isn’t something to argue about. We should do it with the same enthusiasm the eunuch had when he approached a body of water. He was determined he was going to be baptized. We should have that same determination.

Some people are shy and struggle with the idea of being baptized before a large church congregation. However, I would assert that it is not necessary for these individuals to be baptized before a large congregation if it is too much for them. They can simply have someone that is a disciple of Christ baptize them in water. It doesn’t have to be specific body of water. People were being baptized in dirty rivers. The point is the act before God and what is in your heart. So if you are shy about it; just do it among family or friends, but please do it. It is an important step for a believer.

In closing, I just want to say if you’ve been baptized then great. There is so much more to do in the Christian walk. However, if you have not been baptized or maybe you are struggling with the idea, please consider it. Please find a way to make it happen. You won’t regret it and the Father in Heaven will be pleased with your actions. Thank you for reading and God bless.

Joel M. Bauer is a 45-year-old U.S. Army Veteran from Dunn, NC, which is just outside of Raleigh. After being honorably discharged from the U.S. Army, he attended school at Taylor University, a Christian liberal arts school, in Fort Wayne, IN, where he received his BS in social work and psychology. He has worked in such places as a homeless shelter, a community based treatment center for severe mental illnesses, a school for troubled students, and other social service agencies. His current endeavor is to build The Bottom Line website into a site that inspires both Christians and non-Christians alike, and brings glory to God.
Previous Saying Goodbye to Grief (Part II)
Next Why Don’t We Live Together