Breaking News
Home / Family / Another Medal For the Shelf 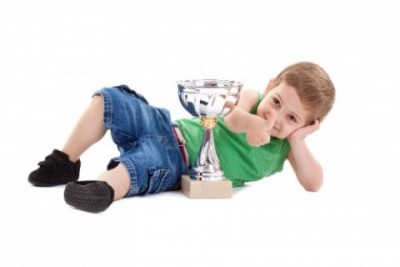 Another Medal For the Shelf

Just the other day I was going through my daughter’s Friday pack (You know, the envelope with all of their papers for the week.), and I found inside her papers a gift certificate redeemable for a free hamburger and ice cream cone from a well-known fast food restaurant.

Her coupon was for reading so many pages this past week but in our household, meeting the reading goal is not usually a concern because our kids have an instilled love for reading which got me thinking and processing my next few thoughts.

Why exactly does she need to be rewarded for reading? Shouldn’t she just read because it’s a necessity in life and you can find enjoyment and your own reward in reading? One thought led to the next and through the processing of my thoughts I came to this generalization.

There is a generation being raised right now that believes they get an award for everything they do, good, bad, or just by participation. They are in a constant state of “Look at me! Look what I can do!” (Thanks to the world of social media). They also are living life in an “always onstage” awareness which has ultimately led kids to believe that they are entitled to everything since they have become famous by growing up via YouTube, Facebook, Twitter, etc. (I joke around with my class of juniors when I say that Ben Franklin invented Facebook because he documented his life on a daily basis. He just didn’t have the means to update his status.)

So, when did all of this happen? How did our society go from a generation of parents who cared more about their kids than themselves, or who would rather suffice their child by upgrading to the latest phone than spending twenty minutes of quality time. What happened to saying “No. You are not old enough yet.” Or “I want you to appreciate what you have first.” Or just simply saying “No because you don’t need it.”

As a teacher, I see the results of this generation. They are in a constant state of uncertainty. They lack the ability to learn on their own. They are afraid to try something new for fear of failing because if they do that means everyone on YouTube or social media will see. They are unable to interact with one another because they simply do not understand the social norms of conversational engagement.   The idea of a relationship is texting someone while they are sitting right next to each other or chatting online. They are lazy and lack motivation if they do not have a way to get an instant response. Lastly, they are extrinsically and not intrinsically motivated. A simple sticker of encouragement, in other words, a reward will temporarily improve motivation.

When I was growing up, there were winners and losers not participators. You received a reward if you won and nothing if you lost. Were my feelings hurt? No. I either did my best or had to work harder. Was I emotionally scarred? Absolutely not! If I lost it was because the other team was better and I had more work to do to win.

God’s word, a tool for parenting, points out the true outcome of the attitude we need to instill in our kids about life. “Remember that in a race everyone runs, but only one person gets the prize. You also must run in such a way that you will win. All athletes practice strict self-control. They do it to win a prize that will fade away, but we do it for an eternal prize. So I run straight to the goal with purpose in every step. I am not like a boxer who misses his punches. I discipline my body like an athlete, training it to do what it should. Otherwise, I fear that after preaching to others I myself might be disqualified. (1Corinthians 9:24)

As parents, we are called to teach our children to earn the only prize in life that matters and that is the upward call of God in Christ Jesus. (Philippians 3:14). Our eternal prize rests in him.

How can this parenting dilemma be remedied? By reading God’s word and applying his principles to your children. Whether you are Miley Cyrus, the President, or unknown, they are all the same in God’s eyes. He judges not by outward appearance but by the inward view. “For where our treasure is, there our heart will be also” (Matthew 6:21). I challenge you to take hold of God’s truth and instill into your child a desire to seek eternal rewards, not ones that are here today and gone tomorrow.

is an author and editor for The Bottom Line Ministries as well as a member of Faith Writers. Currently she teaches high school language arts. She is a mom to four amazing blessings and enjoys every moment life has to offer. Renee has a fervor and drive to learn, she loves to read and spend time with her family, and is involved with her local church ministries. Humbled by God’s gift of words, she has a passion to write what the Holy Spirit has placed in her heart. She hopes to publish her in-progress book someday, but in the meantime, is honored to be placed as part of the TBL writing family and is holding on to the ride wherever God is leading. Renee and her family reside in their country home in Holland, Iowa.
Previous How to Overcome the P.P. Disease
Next Evolution Is Losing Its “Big Bang”